Proving once again that the ground is his, Neiman Gracie put on a grappling clinic at Bellator 213 in Honolulu, Hawaii, serving up the first loss of Ed Ruth’s career.

Wrestling vs. BJJ. That was the story when the Bellator Welterweight Grand Prix returned to action on Saturday night at Bellator 213. In Honolulu, Hawaii at the Neal S. Blaisdell Center, Ed Ruth and Neiman Gracie clashed. Ruth, an undefeated wrestler. Gracie, and undefeated jiu-jitsu fighter. Both had been tearing up the 170lb division in Bellator over the past couple of years. Yet as the grand prix continued, one man was going to suffer his first defeat.

The other would move on to the semifinals of the tournament.

The welterweight grand prix got back underway with Gracie firing kicks early, while Ruth looked to find a way in, pushing Gracie back to the fence briefly. Ruth fired a kick of his own, but Gracie’s had a snap to them. Ruth then scored a takedown, but Gracie immediately began hunting for submissions, throwing up a triangle! Still early in the fight, both men were dry. Gracie, however, wasn’t quite in position, and Ruth managed to survive, slowly working his way free. Ruth finally backed off, letting Gracie up, and for good reason, as Gracie was a level beyond on the mat, as expected.

On the feet, Gracie continued to fire off kicks while Ruth looked to find his range. Ruth would then tag Gracie with a jab with ninety seconds remaining, catching his attention! They’d tie up along the fence in the final minute, with Gracie defending with knees, and Ruth trying to work the body. Gracie briefly flashed a guillotine, but Ruth was out in an instant.

Round two saw the action halted by an early eye-poke. Back underway, a lead right landed for Ruth, and Gracie then changed levels and scored a takedown — only for Ruth to roll through, transitioning to the top! Gracie of course stayed active off his back, and Ruth was looking to scramble free. Gracie would eventually trap him in guard. He’d then transition to a belly-down arm-bar, but didn’t have a good grip on the limb, at least initially. Gracie then nearly managed to sneak onto his opponent’s back in another transition, and they’d finish the round on the ground.

The third saw Ed Ruth backing Gracie up against the fence, firing his right hand. Gracie went to the body with a kick, and while he wasn’t exactly putting on a clinic, his striking was decent enough to keep things close on the feet. Gracie then clipped Ed Ruth with a looping right hook! He’d follow up moments later with a left, but a right hand to the chest by Ruth sent Gracie tumbling onto his back. Of course, that’s where he wanted to be anyway, and Ruth was again forced to go to the ground with one of Bellator’s most dangerous jiu-jitsu fighters. Gracie next locked a triangle onto Ruth’s legs, looking for a sweep. He then latched on with an arm-bar, but Ruth quickly stepped over out of danger! Smart defense by Ruth!

After three rounds, the welterweight battle continued (all grand prix fights were scheduled for five). Ruth was looking tired. Gracie got him down easily enough, and moved to mount. This was a switch — through the first three rounds Gracie had been on his back. Neiman managed to take the back of Ed Ruth, securing a body triangle. He then began landing some ground n’ pound, and as Ruth rolled over Gracie looked to slip his arm under his opponent’s chin. Before long, he had it in, and Ed Ruth was forced to tap!

Not where you wanna be. #Bellator213 pic.twitter.com/A8iDndiHZ1

Gracie now gets a world title shot. He’ll face the winner of Rory MacDonald vs. Jon Fitch later in the welterweight grand prix. 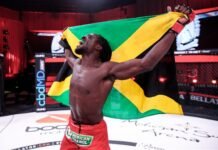 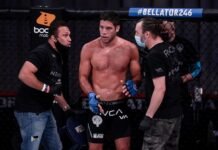 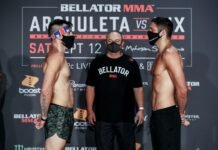