Sam Sicilia improved his record to 2-1 in Bellator MMA on Friday, earning himself a split decision win in a tough battle against Derek Campos at Bellator 212.

Bellator 212 kicked off a two-night stint for the Viacom-backed MMA promotion in Hawaii. Going down Friday night at the Neal S. Blaisdell Arena, the card (doubling as a Salute the Troops event) was something the island state had long desired: the return of a major MMA show to the state that brought fans Rumble on the Rock.

In featherweight action Friday, Derek Campos and Sam Sicilia threw down, with both looking to bounce back from recent losses. Sicilia was 1-1 in Bellator since moving over from the UFC, but had come up short against Marcos Galvao. Campos, for his part, had dropped his last bout to recent title challenger Emmanuel Sanchez.

Who would make it back to the winner’s circle Friday? Campos, it should be noted, was making his debut at 145lbs at Bellator 212. The pair kicked off Friday’s card, and almost immediately, Sicilia dropped Campos with a heavy punch that came off the back of a partially blocked high kick. Campos, clearly, was rocked, and remained under fire while he tried to shake off the cobwebs. Sicilia’s right hand was doing some damage, but at least for the moment, Campos was still in it. Everything, however, every single punch Sam Sicilia was throwing, came with bad intentions.

Campos would dump Sicilia after catching a kick, but by the three minute mark of the first was still puzzling out how to engage without taking serious return fire. A spinning back fist attempt would sail wide, and the pair would settle down for just a moment, the exchanges coming in shorter spurts as the round progressed. Yet Sicilia would score a second knockdown with just a minute remaining, though Campos would recover quickly.

The second round saw Campos working his jab, with Sicilia on the outside. Sam tagged Campos early, but proving his chin could take a pummeling, Campos stood firm. He’d eat a flurry, however, then find himself backed up to the fence. Sicilia was firing lefts, rights, uppercuts; Campos would survive only to take more damage moments later and find himself backed up once again. Against the fence, Campos would hook Sicilia’s leg, then look for a takedown — anything to buy time to recover. Sicilia, however, stayed on his feet, and began teeing off on Campos again. With ninety seconds to go in the round, Campos finally got the fight to the ground. Yet the biggest surprise was that Campos was still in the fight, given the shots he’d eaten to that point.

Campos went right back to the ground game in the third round, briefly taking control of the fight. Sicilia, however, would not be kept down, and on the feet he continued to have the clear edge. He’d take things down again later in the round, controlling the action from the back. Yet while he was able to score some damage, landing a number of blows on Sicilia, it felt like it was simply too late in the bout to change the outcome.

At least for two judges, it was, as Sicilia won via split decision on the scorecards. 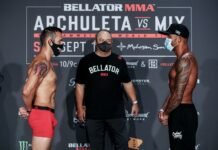 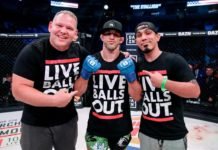 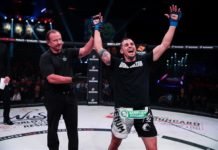