Home Bellator MMA Jack Swagger and a Look into the Long Trend of Pro Wrestlers... 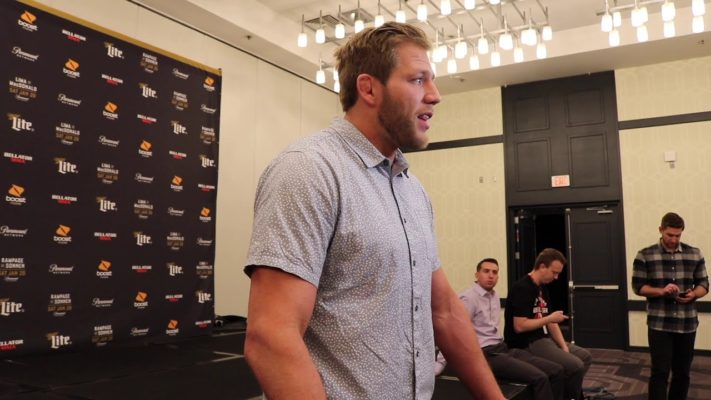 With former WWE superstar Jack Swagger’s MMA debut being announced, let’s take a look at how previous crossovers have gone.

Jake Hager, who previously wrestled under the name Jack Swagger in the WWE, is set for his Bellator debut in January 2019. Swagger wrestled for the company for close to a decade and held the promotion’s World Heavyweight Championship for a small stint in 2010. Hager, prior to the WWE, was an All-American wrestler at the University of Oklahoma, where he held the school’s record for pins in a season.

However, Jake Hager is far from the first to cross over from professional wrestling to the sport of Mixed Martial Arts.

For whatever reason, MMA has always been a sport that has had a crossover from other forms of entertainment. Everyone from former a Power Ranger in Jason David Frank, to baseball MVP Jose Canseco. But for whatever reason (likely due to collegiate wrestling experience), the sport of professional wrestling has always had the most crossover. Ever since the sport’s inception, the sport has had people coming and going from each entertainment medium.

So let’s take a look into the most interesting and noteworthy crossovers from the sport of professional wrestling into MMA.

Honorable mentions go to Dave Bautista, who beat the one and only Vince Lucero in his only professional fight. The late great Bam Bam Bigelow also got destroyed by Kimo Leopoldo in 1996 in Japan.

There appears to be a common misconception regarding the career of UFC pioneer Ken Shamrock. The misconception being that Shamrock went from real fighting to the WWE, then back to the UFC, but there’s a deeper story than that.

Ken Shamrock began training for professional wrestling in 1986, being taught by the likes of Buzz Sawyer and Gene Anderson. Shamrock took a liking to the training and continued to train. He officially made his debut a couple of years later in 1990, under the name ‘Wayne Shamrock’ in ACW. Shamrock would then spend the next 3 years wrestling around the world, most notably in Japan in the Universal Wrestling Federation.

In 1993, Shamrock won his first three fights in Pancrase. Soon after, he competed in UFC 1, where he began his rivalry with Royce Gracie, the first real rivalry in the history of MMA. Shamrock would then spend the next three years competing in MMA, capturing the UFC Superfight championship as well as the King Of Pancrase title.

In 1997, Shamrock left the sport of MMA for the WWE stage. Where he would have a prolific, yet short time in the company, deciding to leave in 2000. Shamrock would return to MMA at Pride Grand Prix 2000, defeating Alexander Otsuka. Shamrock would then falter in MMA, going 4-12 after that bout, including his trilogy with Tito Ortiz which helped save the sport of MMA.

Shamrock is likely the most successful crossover and most impactful crossover from the sport of professional wrestling.

Bobby Lashley grew up the son of a military drill instructor, with his father stationed at Fort Reily in Kansas. There, he discovered his love for wrestling. He later would go on to attend Missouri Valley College where he was the NAIA National Champion at 177 pounds. Lashley would then go on to join the army, and his wrestling career was put on hold.

After his three year stint in the army where he continued to wrestle, he would sign with the WWE in 2004. It was there where cut his teeth under the ECW brand. Being pushed as a big star, he won the ECW championship in late 2006. However, his first stint with the company would come to an end in 2008 after suffering an injury. He was then released after coming back from surgery.

Lashley, after being released from the company, would then turn his attention to fighting. In the same year, he would make his MMA debut, winning it via TKO in December over Joshua Franklin. After winning his next three fights over the likes of Bob Sapp and Jason Guida, he was signed to Strikeforce. He was victorious in his debut fight over former UFC veteran Wes Sims at Strikeforce: Miami.

Seven months later, Lashley suffered his first career setback, losing to Chad Griggs via TKO in the second round. Not long afterwards, Strikeforce was closed and Bobby Lashley wasn’t brought over to the UFC along with the fighters who were left out, and just like that Lashley was back to regional promotions.

Over the next five years, Lashley quietly went 5-1 over his next six fights and was signed to Bellator. It is there where Lashley showed his skill as one of the promotion’s top heavyweights, winning five fights in a row in the promotion, including avenging a previous defeat in his career against James Thompson.

However, his last bout was in 2016, and with Lashley making a return to the WWE in 2018, it is unknown where his MMA career goes from here.

CM Punk in his peak was one of the biggest WWE superstars of all time. Holding the WWE title for 434 days, he was one of the top faces in the company for close to a decade. Having matches against the biggest stars on the biggest stage regularly did a lot of wear and tear on Punk’s body. Combine this with his ongoing issues with the management of the company, Punk controversially walked out on WWE in early 2014.

Flash forward 11 months later and UFC 181 is going down. Then, all of a sudden, there is CM Punk on screen being interviewed by Joe Rogan, being announced as the UFC’s newest signee to the roster. It’s worth noting that CM Punk outside of doing jiu-jitsu casually, and doing karate years prior, he had zero combat-training experience. It’s worth noting that during this interview, we got little to no answers as Punk didn’t know weight class he would be fighting in, when his fight would be, his opponent, or his training camp yet.

As time went on we slowly received those answers. In January of 2015, he began training under Duke Roufus at Roufusport MMA Academy in Milwaukee. Punk then went dark for close to a year, just training, keeping to himself and quietly getting better. It’s worth noting that Punk was going through a lot of injuries at this time as well.

That was until February of 2016 where Mickey Gall and Mike Jackson fought in what was dubbed as the “CM Punk Sweepstakes,” where the winner would face CM Punk later that year. Gall won the bout, and received the official shot at Punk at UFC 203 in Cleveland. After two years of nonstop training and getting prepared, Punk was dominated by Mickey Gall inside of one round via submission.

Punk them went underground once again for almost two years until the UFC made its big PPV return to Chicago at UFC 225. Realizing they could put Punk in another fight and likely make some good money off his name, they put the 39-year-old Punk in there with Mike Jackson, the man who previously lost to Mickey Gall two years ago.

Punk lost the fight by decision, looking better than his initial bout at 203, but still losing 30-26 on all three judges scorecards. As of December of 2018, Punk has yet to be released from the UFC but also isn’t likely to fight again for the promotion. So his fighting future is currently unknown.