All those who were expecting fireworks when Mark Hunt and Justin Willis collided at UFC Adelaide were instead met with a three round chess match.

Mark Hunt entered the UFC as the fighter no one wanted. At least not among the UFC brass. When the UFC acquired Hunt as part of their acquisition of Pride, they saw a fighter on a nasty losing skid. That led to an attempt to buy out his contract. In effect, they were willing to pay Mark Hunt to stay home. Given he was entering the octagon at UFC Adelaide, you know how that turned out.

Hunt wanted to compete. He insisted, even after losing his first UFC fight. And then came the turnaround. The string of knockouts. Hunt went from loser to fan favorite, even earning a fan campaign to grant him a title shot. Eventually he would fight for interim gold, coming up short against Fabricio Werdum.

Along the way, he became the UFC’s knockout king, a fearsome figure in the heavyweight division. Yet if you know that story, you likely know the other as well: Hunt’s growing dissatisfaction with a promotion continually pairing him up with drug cheats, alleged or otherwise. Werdum, Bigfoot, Mir, Overeem, Brock Lesnar. The last, at UFC 200, led to Hunt launching a lawsuit against the very promotion that employed him. It’s still ongoing today.

So when Mark Hunt entered the octagon at UFC Adelaide, likely for the final time, there were numerous story lines on the go. Hunt had said he’d fight at least five more times, despite being in his mid-forties. Having fought out his contract, and suing the promotion, it was likely those fights would come outside the UFC. Justin Willis, meanwhile, got into an altercation at the weigh-ins Friday, adding to the drama.

So how would Hunt respond in the cage?

When the pair faced off, Willis flashed feints and fired off a kick to the body. Hunt pressed forward, slowly, methodically, firing off a punch but missing. He ate a leg kick, that was soon gushing blood. Despite the injury, Hunt returned fire with a kick of his own. He was stood up by a punch from Willis, but continued walking Willis down. Hunt fired a heavy blow that missed, then landed a kick. Then another. Slipped a big swing by Willis, who fired a left. As the round wore on Hunt went to the body, but neither man seemed willing to commit to a firefight, well aware of the knockout power of the other. Hunt landed another kick to the body later in the round; Willis fired off his jab.

But it was single strikes, not combos. A lot of respect, not a ton of action — but edge of your seat anticipation, with the feeling that soon enough, someone would go to sleep. In the second, Willis wisely went after that wounded leg of Hunt. A jab connected for Willis. A straight left. Hunt had eased off the kicks, and didn’t really throw one until the final minute of round two. But it was Willis building a small lead in strikes landed as the buzzer sounded.

Round three began as the second had left off. Hunt eating jabs, Willis able to land his right hand almost at will. ‘Big Pretty’ then connected with a head kick. Not flush, but it still connected. Hunt threw a big overhand, but threw it almost blind, positioning his leg away from Willis, protecting it from further damage. Willis fired off an uppercut. Hunt continued to walk after him, but he was tiring. Despite Hunt throwing some heavy punches in the dying minutes, Willis was nearly always out of range, playing it safe until the bell.

It wasn’t the ending fans wanted for Mark Hunt. But maybe it was fitting. Hunt was never a world-beater, just a fighter who could entertain fans with big knockouts when he did connect. Thanking the fans and the UFC, he finished Saturday by saying “I’ll see you somewhere else.” 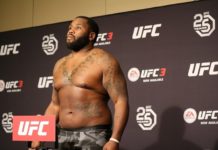