With back-to-back events on Friday and Saturday, the UFC was in full swing opening the month of December. Kicking off the televised preliminary card at UFC Adelaide on Saturday was a flyweight scrap between Elias Garcia and Kai Kara-France. For Kara-France, a teammate of Israel Adesanya, he was looking to make a statement in his promotional debut. And with the division on the ropes, both fighters had to know how important an impressive showing Saturday night really was.

It appears they were well aware. In a first round that was primarily contested on the feet, Kara-France ate a bomb early that knocked him down, but survived and managed to drop Elias Garcia with a high kick later in the the frame. While he couldn’t seal the deal then, that led to a quick exchange of strikes. Kara-France kept the pressure up, and would soon have Garcia on his back. Garcia defended with an arm-bar, only for Kara-France to pull free, then take the back of his opponent. With both hooks in he looked for a way under the chin, controlling his opponent’s wrists. Garcia, however, managed to escape, only to eat a number of blows from the top that saw him slowly get back to his feet at the end of the round.

In the second, a left wobbled Garcia, and another followed. Kara-France was again in control, and he added a third left moments later. Garcia was in retreat, and soon on his back, but as Kara-France engaged, Garcia locked in a triangle! It was in tight, and Kara-France worked to defend, picking Garcia up and slamming him down. Yet even as he broke free of the triangle, he was left to deal with an arm-bar attempt. Finally free, Kara-France again put the pressure on, dropping elbows on Garcia, who remained on his back. Incredibly, there was still a full two minutes to go in the round. Garcia held on for a good minute, but was eating more and more blows, rolling over and covering up and one point as Kara-France simply dropped bombs.

In an incredible show of heart, however, Garcia never stopped defending. He escaped the round, though after the drubbing he took in the first ten minutes, it might have been better if he hadn’t.

While Garcia had some success early in the third, even gaining some time on top, by the midway mark he’d been dropped, and was on his back again. Kara-France allowed him back to his feet, however, recognizing the danger Elias Garcia posed from his back. From there it was Kara-France in control, and towards the end of the round, he began really pressing for the finish. Garcia ate an uppercut while sitting, scrambled to hold on to a leg, and suffered a bludgeoning in the final minutes, yet somehow, held on to the end.

Kara-France’s dominance was never in question, and he proved ready for prime time. Garcia, meanwhile, displayed tremendous heart in a losing effort. 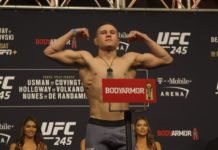 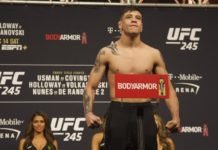 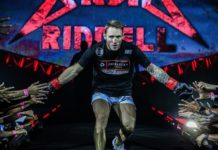