Deron Winn is looked at as one of the brighter prospects to make the transition from wrestling to MMA. Winn, who was 4-0 going into his fight with former UFC vet Tom Lawlor, last fought in Bellator earlier this year. Lawlor, who has beaten the likes of CB Dollaway and Patrick Cote, was released from the UFC earlier this year. With the two being put in the co-main slot, they both would want to make an impression in such a big spotlight right below the legendary headliners in Chuck Liddell and Tito Ortiz.

Rounds one and two were an interesting affair as Winn and Lawlor traded on the feet. Lawlor had been out of the sport for two years and absolutely showed his ring rust, as Winn landed some really nice power punches on the UFC veteran. Winn didn’t use his wrestling at all in the first two rounds, much to the shock of many.

Round three featured the most action of the fight, as the two traded on the feet for all of thirty seconds before Lawlor got taken down. Soon after getting to his feet, Lawlor landed a big left hand that possibly stunned Winn. He then looked for a guillotine but couldn’t get it. He then spent the duration of the round on his back, securing Winn’s victory.

Just like that, the biggest win of Deron Winn’s young career.

Winn was seen on social media agreeing with fans who were not happy with the co-headliner’s pay for the event prior to tonight’s fight card. Hopefully a victory over a respected veteran like Tom Lawlor will propel the prospect to bigger and better things. 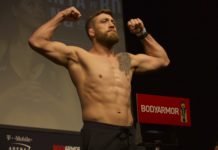