Germaine de Randamie hadn’t fought since UFC 208. She’d been stripped of her featherweight title. Dealt with injury. Suffered through a long layoff. But she got the job done at UFC Denver against Raquel Pennington.

At the UFC’s 25th Anniversary show in Denver, Coloardo on Saturday, a former champion at featherweight met the most recent challenger at bantamweight. Germaine de Randamie returned at UFC Denver (UFC Fight Night 139), looking to get the better of Raquel Pennington, who was coming off a title challenge loss to Amanda Nunes. De Randamie was back to bantamweight, and had been out over a year. Pennington, meanwhile, missed weight for the fight as she struggled with hyperthyroidism.

The pair went at it right off the bell, Pennington winding up moving back after the initial attack. The Colorado crowd was firmly in her corner, chants of ‘Rocky! Rocky!’ bellowing throughout the Pepsi Center. Pennington would drive de Randamie into the fence, and hold her there for a time, looking for a way to get her to the ground as the pair exchanged short knees. ‘The Iron Lady’ reversed briefly, with more knees following, before Pennington turned her back around.

The third round was almost identical to the second. Pennington allowed de Randamie to fight at range far too long. She couldn’t get her opponent to the ground. GDR’s striking was crisp. A low blow on a knee attempt by de Randamie halted the action late, but there were no other surprises, and the decision by that point was a given. 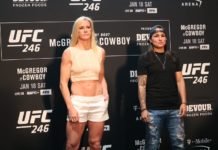