Maycee Barber has a goal of becoming the UFC’s youngest champion, and knows she belongs in the UFC. At UFC Denver, however, she’s done talking. Instead, she plans on making a statement in the cage.

Denver, CO — The UFC women’s strawweight division will be introduced to The Future on Saturday night at UFC Denver. That’s when Maycee Barber (otherwise known as ‘The Future’) makes her debut in the promotion. That follows an exciting outing on Dana White’s Tuesday Night Contender Series, where the Colorado native earned herself a UFC contract with her fourth stoppage in five pro fights.

Barber (5-0) took part in her first open workout on Wednesday, and spoke to reporters including Cageside Press ahead of UFC Denver. “I’m confident, I’m excited, I’m ready,” she told those in attendance. Yes, there are nerves. “You’re always going to get nervous, anything you do, if you care about it,” she said. “But that’s what keeps you going. That’s what keeps you motivated to continue.”

“There’s days that you have them, and days that you don’t,” Barber said of the nerves heading in. “The closer I get to the fight, the more excited I get, and the less nerves I feel.”

There’s no question in Barber’s mind that this is where she is meant to be. “This is where I belong. I belong in the UFC. I’m so excited to do it here in Colorado. This is my home.”

“What better than to do it than on the anniversary of the UFC,” she said, and in her birthplace no less. Now, Colorado becomes her birthplace in the UFC as well.

Barber won her way into the promotion, so there’s little question that she belongs. A big question, however, is opponent Hannah Cifers. A late notice replacement, Cifers (8-2) is also making her UFC debut, stepping in for Maia Stevenson. The change in opponents did not phase Barber.

“I’ve had, in my amateur fight, in my pro career before even getting to the UFC, I’ve had eight opponents back out,’ she recalled. “So it wasn’t something [where] I’m like ‘oh boy,’ you know, ‘I just lost my opponent!’ I know that the UFC is good at replacing opponents. They’re not going to leave you hanging. They give you a contract to sign for a fight, they’re going to give you a fight.”

“It was nothing that we were too worried about.”

As far as those title aspirations, Barber wants to make her next statement in the octagon. “I’ve always said I want to be the youngest UFC champion, but it’s better to just let your actions speak, and talk a little less,” she said. “So we’re going to say less, and do more.”

Asked whether she had a blueprint to her goals laid out, Barber revealed that she’d rather take it one day at a time. “Right now I just have to fight, and that’s what I’m going to do,” she said. “I’m going to fight, I’m going to finish, and then we’ll take the next step.” 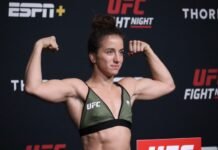