Calvin Kattar is hoping a big first round finish of Chris Fishgold at UFC Moncton earns him a shiny new contract with the promotion, having entered the night on the final fight of his four-fight deal.

Moncton, NB — Calvin Kattar walked into UFC Moncton on the final fight of his four-fight UFC deal, his first contract with the promotion. In Chris Fishgold, he was facing a sizable underdog. In other words, it was a fight Kattar was expected to win. He did just that, but what matters is how he finished it: with a punishing TKO that brought the crowd to its feet.

On his performance, he deemed it “a good fight.” And one he took seriously despite being the heavy favorite. “I was once a 4-to-1 underdog myself, so I didn’t underestimate him. It’s a big fight for me, it was the fourth fight of my contract. I wanted to finish it in solid fashion.” Finish it he did, and now he’s looking forward to the next step in his UFC career.

“I enjoy fighting for this company, and I’m excited to stick around for some time now,” Kattar said.

What may be surprising to some, given he entered the night 2-1 in the promotion, was that there’d been no offer to date to renew on the part of the UFC. “No, no not at this point,” Kattar said, but “I’m fine with that man. I’ve dealt with way worse adversity in my life. We’re at the fourth fight of a contract to have the option to fight for the best organization in the world. It’s a great opportunity. So to even have that opportunity to be on the fourth fight of my contract, I was happy about, but definitely excited to get the finish now and show my worth, my value and hope they want me [to keep] sticking around.”

Kattar (19-3), now at 3-1 with two finishes among his UFC wins, certainly seems like someone the UFC will want to hang onto.

As far as the win being motivation, leading to his first round one finish since 2010, Kattar was beaming. “You’re telling me, man. We don’t get paid by the minute,” he exclaimed. “I was happy to get in, get out, and even in that first round, take some pretty good damage. Hat’s off the Chris Fishgold, I think he’ll bounce back strong, but tonight was my night, and I wasn’t going to have it get taken from me.” 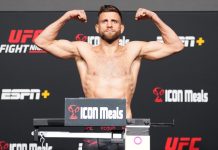