Arjan Bhullar would love to be on a UFC card in Toronto, as he feels Brampton fans in particular would come out to “support their boy.”

Moncton, NB — Arjan Bhullar has two nations to represent when he steps in the UFC octagon. The Indian-Canadian did both proud on Saturday at UFC Moncton, getting back in the win column with a unanimous decision win over Marcello Golm of Brazil. Bhullar had been undefeated prior to running up against Adam Wieczorek at UFC Glendale earlier this year. A submission loss — to an omoplata, no less — certainly hurt. Yet it was a good gauge of Bhullar’s place in the heavyweight division, and he bounced back impressively in New Brunswick.

Bhullar pressured Golm throughout the fight, and early on, Golm was able to shake off the decorated wrestler’s takedowns. That, however, would not last long. Golm suffered a significant injury to his foot/ankle sometime in the third round, and between frames it appeared grotesquely swollen. That led to a big takedown in the third for Bhullar, and from there, he cruised to a unanimous decision win.

After the fight, an exhausted Bhullar was in good spirits, and discussed the win with reporters, including Cageside Press. “We had a good game plan of pressuring,” he said of his performance. “Mixing up our strikes with our takedowns. He’s made some adjustments and some improvements, but we were comfortable the whole time. Dominated going forward. All the judges gave it to us. It’s good, things to build on and things to be happy about.”

Calling Golm a prospect, Bhullar later added that “I’m going for that title, I’m championship caliber, and there’s levels to this.” The Canadian wasn’t surprised by Golm avoiding the takedown for so long — and his team, he said, did a great job making him aware of Golm’s leg injury between rounds.

As for what’s next, Bhullar isn’t calling out any names, but he lit up about the upcoming Toronto card. “I’d love to go there. Brampton would come out for their boy, I’ll tell you that much,” he exclaimed. For those unaware, Brampton is just down the road from Canada’s largest city, and boasts a large Indian-Canadian population. “But that’s not my job, we’ve got bosses in the UFC, I’ve got management to help with matchmaking,” he added. “I’ll let them figure that out. I’ll be in the gym with my coaches getting better every day.”

The end goal of all that training, of course, is to win it all. “That’s the only reason I’m in this sport, is to be a champion,” Bhullar told reporters backstage. “I’ve never looked to be in a sport just to participate. That’s not who I am. I look to excel at everything I do. And that’s what drives me. That is our goal, every time I get out there, it’s to get one step closer to that [title].” 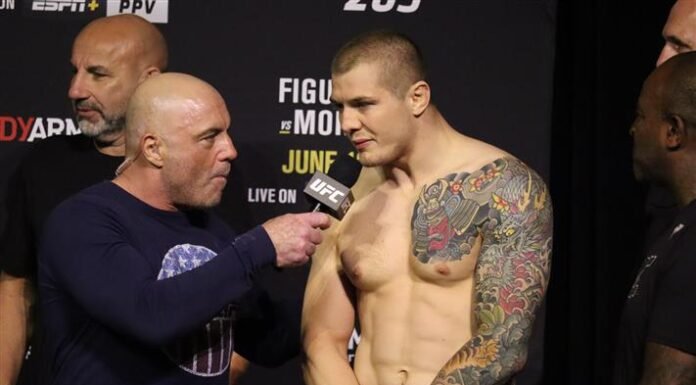