Lorenz Larkin made it two in a row at Bellator 207 with a one-sided decision victory over Ion Pascu.

Lorenz Larkin left the UFC in the midst of a huge run, winning four of five, culminating with a huge first round knockout over Neil Magny. His momentum did not carry over into Bellator, losing his first two bouts to Paul Daley and Douglas Lima. Larkin was able to bounce back with a decision victory over Fernando Gonzalez.

Ion Pascu was 17-7 on the European circuit before joining Bellator this April. In that bout, he fell to the talented wrestler Ed Ruth by unanimous decision. Pascu then returned to Europe, winning a fight in BAMMA prior to tonight’s bout.

After a short feeling out process, Larkin landed a combination, capped off by a blocked head kick. Ion Pascu shot for a takedown, but the cage helped Larkin defend. Larkin seperated and landed a right straight.

Pascu shot for another takedown that was blocked by Larkin. Larkin pushed away and landed a knee to the body on the exit. Pascu ate a hard body kick as Larkin commanded the stand-up. Pascu landed a leg kick, but Larkin answered with a front kick to the body. Larkin stuffed another takedown to cap off a fairly one-sided first round.

Pascu started the second round with a takedown attempt that was stuffed yet again. Larkin landed another knee to the body then took a shot to the groin (the second time in the fight). Once the fighters gained distance, Larkin began peppering Pascu with unanswered leg kicks.

Larkin threw a flying knee that did not land flush, then stuffed another takedown, reversing position on the fence. The fighters seperated, and Pascu threw a combination that Larkin defended. Pascu caught a body kick then attempted a takedown, but Larkin stayed balanced as Pascu tried to drive him to the ground with a single leg. As he stayed on his feet (foot), Larkin landed a heavy uppercut that seated Pascu near the end of the second round.

Pascu started the third round as aggressive as the others, but again to no avail. Larkin commanded the distance with his jab as he avoided another combination from the Romanian. Larkin began opening up on the feet, landing uppercuts and body kicks seemingly at will.

With two minutes left in the final round, Pascu finally landed the elusive takedown and moved to half guard. Larkin worked his way to full guard and attempted an armbar that Pascu avoided. Pascu moved to half guard again, and continued to land ground and pound. As time came to a close, Pascu attempted an ankle lock that Larkins was able to withstand to the final bell. 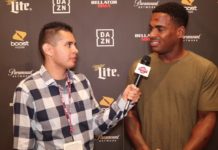