PFL League President Carlos Silva has no doubt that the Professional Fighters League will be able to fill out a lightweight division around Kayla Harrison next season.

Long Beach, CA — The playoffs are in full swing, and we don’t mean baseball. On Saturday night in Long Beach, the Professional Fighters League post-season continues with PFL 9. The night will see the lightweight and light heavyweight tournaments continue, with quarterfinal and semifinal action. That’s right — two fights in a night.

Speaking to Cageside Press at Thursday’s open workouts, PFL League President Carlos Silva said that “the 45s and the heavyweights were spectacular during the playoffs [in New Orleans], and we expect the same from the 55s and the 205s here. Lot of great match-ups. Fight twice, win twice.” It’s a simple, exciting concept familiar to MMA fans who saw the sport rise up using the single-night tournament format, a mainstay of martial arts competitions for years.

So what’s the secret to standing out in the mixed martial arts landscape? As Silva sees it, “MMA is just growing. Everyone loves it. It’s sort of the perfect package, in fifteen minutes during a fight, you get to see an outcome,” he explained. “And it just fits sort of the world we live in right now. UFC just [had a] massive fight last weekend, Bellator’s got a big fight this weekend, we’ve got a playoff fight this weekend. So there’s plenty of MMA for the fans, because the fanbase just keeps growing. And I think the PFL’s format is giving the fans what they want. If the fighters win, they advance. So the fans know what to expect.”

That format will expand next year, when the promotion adds the women’s lightweight division. The 155lb weight class is one both the UFC and Bellator MMA have refused to touch. The UFC, after all, has struggled to build a 145lb weight class. Yet Olympic gold medalist Kayla Harrison has become a breakout star for the PFL, winning both her fights this year. Of course, those weren’t part of any tournament.

Next year, that will change. To the critics, Silva assured that “we’re going to find another ten girls that are going to jump in at 155. We’re going to put them into a 12-female division, just like we’ve on the men’s side. They’re all going to have to come and fight and win, including Kayla.”

“Just because Kayla’s a big star and she’s a two-time gold medalist, none of these other women in the weight class are going to give her a free fight,” Silva continued. He sees it as playing out similar to the men’s side this season, where fighters were motivated to make the post season, and points mattered. “I think the format will prove out. If Kayla or Brittney [Elkin], Jozette [Cotton], any of the other women [who] come, they’re going to come and try to make it into the playoffs and try to win a million dollars.”

In the meantime, PFL 9 takes place Saturday night in Long Beach at the Long Beach Arena. There, the lightweight and light heavyweight finalists will be determined.

Catch our full interview with PFL League President Carlos Silva ahead of PFL 9 above! The card airs live on NBC SN on Saturday, October 13 following prelims on Facebook Watch! 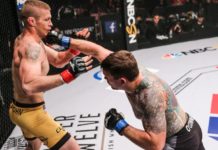 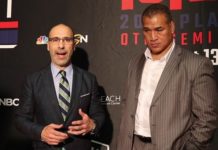 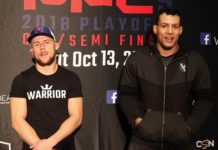