Former Invicta FC atomweight champ Michelle Waterson earned her second straight win in the strawweight division at UFC 229 on Saturday, using her arsenal of kicks to sail past a game but outmatched Felice Herrig.

In strawweight action at UFC 229 in Las Vegas on Saturday night, two long-serving veterans of women’s combat sports threw down. Both ‘The Karate Hottie’ Michelle Waterson and ‘Lil Bulldog’ Felice Herrig have been involved in martial arts for over a decade. Waterson made her pro MMA debut in 2007, going on to become atomweight champion in Invicta FC before moving to the UFC. Herrig turned pro in 2009, but was competing in kickboxing for years before that.

Both had yet to fight for gold in the UFC, however. Herrig had amassed an impressive four fight win streak, only to be derailed in her last fight against ex-title challenger Karolina Kowalkiewicz. Waterson had been inconsistent at best in the UFC, going 3-2 despite high expectations for the popular fighter.

On Saturday, one woman was going to inch a little closer to the ultimate goal. It was Waterson who got the action going, setting up a kick to the body with her hands. Herrig would walk her down, allowing ‘The Karate Hottie’ to land another kick. Herrig would keep the pressure on, but was forced to deal with kick after kick, while flashing a few of her own. Waterson then began firing a side kick to the thigh, while constantly circling, staying away from Herrig’s power. With just under two minutes remaining, Herrig finally got her opponent in a clinch up against the cage. The pair traded knees, and Herrig would try to land a trip as Waterson struggled to walk with her weight on her, but the round would come to a close with the two still tied up.

Herrig got the fight to the fence earlier in round two, but Waterson was able to turn her, land a standing elbow, and later fire off a kick to the throat. Waterson then landed a throw, landing on top and working from half guard. Waterson kept her forearm on Herrig’s throat, and slipped in a number of elbows before working the body with punches. Herrig finally got Waterson in her full guard, wrapping her up, but was unable to escape before the end of the round.

Once again in the third Herrig put the pressure on early, and said hello to a Waterson kick for her troubles. Felice was swinging for the fences, knowing she was in need of a finish. Yet when Waterson initiated a takedown in the open it was Herrig landing on top, giving her top position for the first time in the fight. Despite that, it was Waterson landing elbow after elbow from her back. Waterson then attempted an omoplata, which Herrig was able to pull free of. The ref then stood the pair up, telling Herrig she needed to work more while on top.

Back on the feet, it was Waterson and her kicks doing the damage once again, and while a spirited effort, Herrig simply couldn’t find an answer for the skilled striker. Post-fight with Joe Rogan, Waterson told fans that she wanted to “be a superhero” in the cage, and the first UFC champion that’s also a mom. With her win Saturday, she’s one step closer to both. 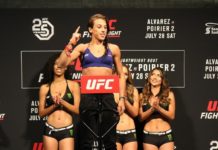 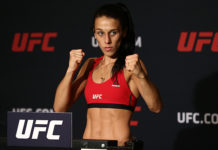 Jorge Masvidal Talks Mezcal, Pizza Pop-Up, and Getting Fired From a Restaurant on his...