UFC 229 is almost upon us. The biggest card of the year thus far for the UFC sees Conor McGregor challenging Khabib Nurmagomedov for the lightweight title, and ahead of the big night, all fighters hit the scales.

Plenty has been written about UFC 229, from the main event on down. On Friday, with the official weigh ins kicking off at 9AM PT in Las Vegas, the final hurdles would hopefully be cleared. All fighters were set to hit the scales, including the main event. Plenty of eyes were on champ Khabib Nurmagomedov, who had struggled with weight cuts in the past.

Once the weigh ins were complete, it was just a matter of time. And with Khabib Nurmagomedov leaving Thursday’s pre-fight press conference before star Conor McGregor even arrived, the occasion (at the ceremonial weigh ins later in the day) would also give fans the final face off between the main event fighters.

Khabib Nurmagomedov hit the scales first Friday morning at the Park MGM, coming in right at the championship weight of 155lbs. Most importantly, Khabib looked to be in solid shape, not overly drained from the weight cut.

From there, the bulk of the card hit the scales in an orderly fashion. Tony Ferguson, Derrick Lewis, Ovince St. Preux, Felice Herrig, and Michelle Waterson all weighed in early, and after roughly thirty minutes, only four fighters remained. Those were Aspen Ladd, Alexander Volkov, Anthony Pettis, and headliner Conor McGreogr. Volkov would roll in with about an hour to go, hitting the heavyweight limit easily at 251lbs. Then came Conor McGregor a few minutes later, marching straight to the scale, looking in excellent shape, and coming in at 154.5 – half a pound under championship weight. McGregor cut a pose with a fiery look in his eye, evoking a cheer from those present. Just like that, the main event was official.

Ladd and Pettis would weigh in last, both using barriers, but hitting the mark. With all fighters making weight, UFC 229 was a go!

Fighters have until 2PM ET / 11AM PT to hit the mark. Full results from Friday’s weigh in can be found below! 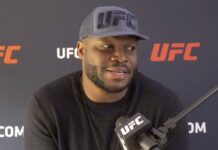