Daron Cruickshank extended his finishing streak to four at RIZIN 13 on Sunday, taking out TUF 14 winner Diego Brandao with a flying knee.

RIZIN 13 had to deal with a typhoon, and competition from Bellator 206 (which ran late into Saturday night/Sunday morning for western MMA fans) on Sunday, as it held RIZIN 13 in Saitama, Japan. What it did have going in its favor was a stacked card which resulted in some exciting finishes. Mirko Cro-Cop once again turned back the clock, elbowing the much younger Roque Martinez out of the building. And former UFC fighters Daron Cruickshank and Diego Brandao threw down as well. Brandao, of course, was a former Ultimate Fighter winner (season 14, back in 2011).

Both men were hitting hard in Saitama on Sunday. The end result? A punishing flying knee knockout for Cruickshank, who has found great success while fighting in Japan.

Brandao kept Cruickshank on the outside early at RIZIN 13, looking to trap him in the corner. Yet Cruickshank was lightning quick, able to escape and fire off counters with ease. It was Brandao who tried a jumping knee early, with Cruickshank cornered. Cruickshank would attack the body with kicks after catching one of Brandao’s, and if one thing was clear, it’s that the pair were looking to finish.

That finish would come when Cruickshank, who had been getting creative with spinning kicks and back fists, was backed into a corner again. Launching a flying knee, he caught Brandao flush, just as the Brazilian appeared to be changing levels.

That was all she wrote. Cruickshank improved to 22-10 (1NC) with the win, and is now on a four-fight win streak. Three of those have come in Japan under the RIZIN banner. 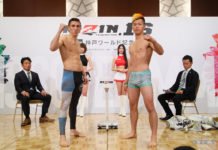