The main event, and Brazilian legend Antonio Rogerio Nogueira (Little Nog) were among the big winners at UFC Sao Paulo on Saturday.

UFC Sao Paulo had a main event that many questioned. Originally planned as Glover Teixeira vs. Jimi Manuwa, injuries to both fighters resulted in Thiago Santos taking on Eryk Anders on Saturday night. A pair of middleweights, fighting at light heavyweight, atop the year’s final UFC card in Brazil.

Those worries proved unfounded. The pair battled for three full rounds. Anders had the upper hand in the grappling department. Santos had a clear edge on the feet. And at the end of the third he unleashed a hellish string of elbows as Anders shot for a takedown. Anders was stunned. At the end of the round, he couldn’t stand, couldn’t get to his stool. Having taken the fight just six days prior, he’d burned everything in his gas tank. The fight was over, but what a fight it was.

Not surprisingly, the UFC Sao Paulo main event between Santos and Anders earned the Fight of the Night. Santos will now have a tough choice to make: stick around 205lbs and see if he can recreate the success found by fellow former middleweight Anthony Smith, or drop back down to middleweight, where he remains one of the most physically imposing athletes in the division.

Also winning big on the night, ‘Little Nog,’ a.k.a. Antonio Rogerio Nogueira. The legendary Brazilian fighter turned back time in knocking out the always game Smilin’ Sam Alvey. That knockout earned him one of the event’s Performance of the Night bonuses. Nogueira had not won since 2016, and had not fought since that same year, a loss at the hands of Ryan Bader, who currently holds light heavyweight gold in Bellator MMA. Nogueira owns victories over the likes of Alistair Overeem, Dan Henderson, Tito Ortiz, and Rashad Evans. With the win at UFC Sao Paulo, he’s extended his career another fight or two, assuming his body holds up.

The final Performance of the Night bonus went to Charles Oliveira, who passed Royce Gracie for the promotion’s submission record on the night. Oliveira submitted Christos Giagos via rear-naked choke for his 11th UFC submission. At just 28 years old, he has plenty of time to build on that.

All four bonus winning fighters at UFC Fight Night 137 will earn an extra $50,000 for their efforts. 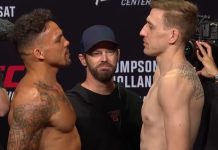 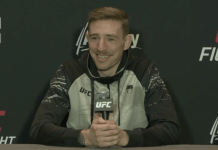 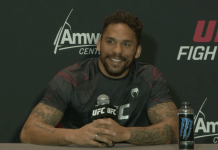