Phil Davis, Ryan Couture, and Cindy Dandois have all been added to Bellator MMA’s return to Israel later this year.

Former Bellator MMA light heavyweight champion Phil Davis has his next bout booked. First reported by MMA Junkie, Davis will face Vadim Nemkov when the promotion returns to Israel on November 15. The event has not yet been officially named but will likely be either Bellator 209 or 210. Also appearing on the card will be Ryan Couture, taking on Israel’s own Haim Gozali for the second time. And making her promotional debut, Cindy Dandois (12-3), who has fought all over the map in terms of weight in recent years, and made stops in both Invicta FC and the UFC prior to landing in Bellator.

Dandois will face Israeli Olga Rubin (4-0) at the event, per a second report by MMA Junkie. Having fought at both bantamweight and lightweight in recent years, Dandois has a chance to play a key role in Bellator’s featherweight division. Picking up wins in Cage Warriors and RIZIN FF since parting ways with the UFC, Dandois is currently on a 7-1 run that includes a win over current UFC featherweight Meagan Anderson.

Ryan Couture (11-6) and Haim Gozali (23-9) had their initial go round back at Bellator 180 last year in New York. There, Couture picked up a decision victory over the ‘Israeli Batman.’ Gozali has split a pair of fights since, while Couture is coming off a loss to Saad Awad at Bellator 201.

Phil Davis (19–4 (1)) has won both his bouts since losing the Bellator light heavyweight title to Ryan Bader on that very same Bellator 180 card in NYC. Those wins came over Leo Leites and Linton Vassell, with the latter coming at Bellator 200 in May. Vadim Nemkov (9-2), meanwhile, is in the midst of a four fight win streak, with wins in Fight Nights Global, RIZIN, and Bellator. All four of those wins have been stoppages. 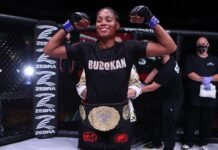