After being yanked from UFC 223 for taking part in Conor McGregor’s bus attack antics, Artem Lobov is being shipped North to Canada to face the dangerous Zubaira Tukhugov at UFC Moncton.

Artem Lobov is getting another shot in the UFC. Despite being embroiled in the controversy surrounding UFC 223 in Brooklyn, New York, the promotion has booked Lobov into a bout against Zubaira Tukhugov this October at UFC Moncton. The UFC announced the bout on social media Monday.

Lobov (14-14-1), best known as a teammate of Conor McGregor, was scheduled to face ‘Bruce Leeroy’ Alex Caceres at UFC 223. However, the SBG Ireland fighter took part in McGregor’s melee, which saw the Irish star storm a bus housing rival Khabib Nurmagomedov. The move was reportedly in retaliation for Khabib and his teammates cornering Lobov earlier in the week, but regardless, the fight against Caceres was given the ax.

Lobov is just 2-4 with the UFC, and began his tenure on The Ultimate Fighter 22, where McGregor served as his coach. Though eliminated, McGregor was able to bring him back onto the show, though Lobov lost at the finale. All six of Lobov’s UFC fights have gone to decision, and he enters UFC Moncton on a two-fight losing streak.

Zubaira Tukhugov (18–4), on the other hand, is 3-1 in the promotion, and coming off his first loss under the UFC banner, against top featherweight Renato Moicano. Prior to that, the Russian had been on a nine fight win streak. 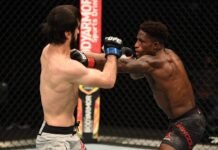 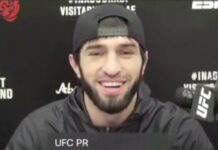