Renato Moicano shocked UFC fans with the biggest win of his career, as he took out ‘Killer’ Cub Swanson at UFC 227 on Saturday night in L.A.

UFC 227 went down Saturday from Staples Center in Los Angeles, California, and the third fight of main card saw UFC Veteran Cub Swanson square off with Renato Moicano in a three round featherweight contest. It’s a bout the promised to bring fireworks, and it did not disappoint.

Swanson entered the night after dropping a pair of fights, the first to now number one contender Brian Ortega when the two met at UFC Fresno in the main event, and second from former Champion Frankie Edgar at UFC Atlantic City.

Moicano meanwhile entered the octagon after a bounce back win, with a decision over Calvin Kattar at UFC 223. Prior to that he also dropped a fight to current number one contender Brian Ortega at UFC 214.

On Saturday at UFC 227, both men looked to feel each other out early. Swanson led with a right answered by a body kick from Moicano. Swanson then opened up with some kicks of his own. Moicano answered back in kind, and the two exchanged. Moicano landed a nice right. Swanson dove in with a kick followed by a stiff punch. That was a frequent attack early, with Swanson trying to close the distance on the larger man. Moicano answered back but Swanson landed a hard. Undeterred, Moicano responded with a crisp jab on the button that dropped Swanson! He recovered quickly and, got back to his feet but Moicano pressed, took him to the cage (with Swanson showing great balance on one leg), then threw him to the mat. Moicano worked into half guard and Swanson held on as he tried to recover. They scrambled and Moicano got on Swanson’s back as he tried to escape. The Brazilian locked in the rear naked choke, and it was tight. Before long, he got the tap.

Moicano showed a tremendous amount of respect in the cage after the bout, bowing down to Cub. Moicano will need another step up in competition next time out, and spoke of title aspirations post-fight. As for Swanson, with three straight losses, his next fight will be critical. 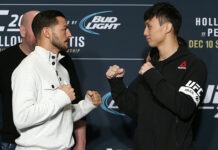 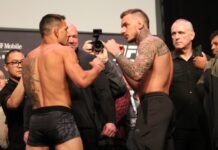