No mixed martial artist today has more skills than Demetrious Johnson, but a familiar foe in Henry Cejudo possesses the physicality and experience to be the greatest threat to the champion at UFC 227.

Demetrious Johnson already has the numbers to prove he is the best in the world. Eleven title defenses, ten different opponents during his reign and only one forced Johnson to switch his plan of attack. Henry Cejudo is new and familiar at the same time, having previously lost to Johnson but evolved into a greater threat than ever before. Johnson is a rightful favorite, but can he find his brilliance again at UFC 227 to overcome his toughest foe?

The criticism has finally been exhausted for “Mighty Mouse.” He has gone through every opponent, passed every test, and overcome every challenge. Since becoming champion in 2012, the only insult that can be made is that he has made it look easy to the point that some of his fights lacked drama. After so many years of dominance, the bravado of his rivals fall on deaf ears. No one cares about what Johnson’s opponents say, because it is already understood that he is better than they are by a mile.

This has created a unique situation for Johnson. He contends that it would have to be worth his while financially to move up to 135 pounds, something that the UFC appears to have not met him on. Earlier this year, with reports that the company was working on a fight with TJ Dillashaw at Johnson’s home of 125 pounds, the fight appeared to fall apart as Johnson felt he was not being compensated fairly for the bout. With seven years in the UFC and more than a decade as a professional, Johnson is privy to the business of the fight game. He is aware that his reputation and brand is centered around his legacy. He has made it clear, if he is not going to be compensated then he is not going to go out of his way to face an opponent who poses a threat to the historic legacy he has built.

Henry Cejudo experienced an accelerated track to the title when he arrived in the UFC. Johnson was in the process of going through the division, and the company pursued the easy sell of having their champion face the former Olympic gold medalist. Johnson stunned Cejudo with a first-round knockout that only bolstered his legacy, and Cejudo subsequently returned to the drawing board.

In the two years since the bout, Cejudo has endured an odyssey of his own. He coached The Ultimate Fighter, but the showcase of his vastly improved striking was marred by a controversial decision loss to Joseph Benavidez. He went on to have a clinical performance against Wilson Reis and neutralized surging contender Sergio Pettis to get himself back to the top of the division. In between, he found himself caught in a wildfire in Northern California.

Earlier this year, Cejudo detailed the harrowing experience of nearly losing his life as the blaze began to engulf his hotel and he was forced to make a dramatic escape. Now on the championship stage again, the story has become part of the fight as Cejudo discusses the new lease on life he has following the experience.

Stylistically, Cejudo arguably brings the blend of physicality and skills that should threaten Johnson more than most of his past opponents. “The Messenger” should look to keep Johnson with his back to the fence and attack with body shots and initiating the clinch. Johnson’s skill-set is second to none in the UFC so Cejudo should look to wear him down as early as possible. If he executes the game plan well, it will create opportunities to take out the champion.

For Johnson, he should look to threaten with his full skill-set. Cejudo may have more mass and power as he surges forward, but Johnson can counter that by using his speed to get in and out with strikes. Most importantly, he should use his striking to set up his takedowns. If he is able to effectively connect with his punches, he will force Cejudo to raise his guard and thus become susceptible to being taken down if Johnson can set up a feint. Cejudo is an excellent wrestler but will have a difficult challenge if he ends up on his back against a superb grappler in Johnson.

A Cejudo victory would give new life to past title challengers, but it’s impossible to conceive the UFC not giving Johnson an immediate rematch. Should “Mighty Mouse” retain the title, Sergio Pettis and Jussier Formiga would appear to be next. The two are expected to meet later this year. A fight with the winner of the TJ Dillashaw/Cody Garbrandt bout on the same night will also be an option fans push for, but it remains to be seen if the interest level will still be high following the fights on Saturday.

Though they may not be receiving the attention they deserve, the bout is a critical one. Cejudo has the challenge of upsetting the most dominant champion in UFC history. Johnson has his toughest title defense to date on paper. The numbers say Johnson is not slowing down, but as always, anything can happen when the cage door closes. 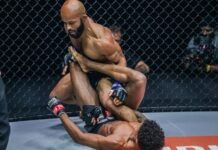 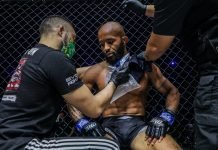