Making it to the UFC is pretty tough. Competing in the promotion? Even tougher. Doing so without a full training camp? That’s enough for some fighters to turn down a fight. That’s not the case for Northwest featherweight Austin Arnett, who is enjoying his first full camp in the promotion ahead of his second career UFC bout in Calgary this weekend.

After taking his first career UFC fight on one week’s notice earlier this year, Austin Arnett is readying for his next bout in a much more traditional fashion. Getting a full camp, training with incredibly talented partners and coaches, and utilizing the UFC Performance Institute have the 145-pound prospect at the top of his game.

Arnett’s camp schedule wasn’t far off of teammate Michael Chiesa’s, who fought at UFC 226 earlier this month. The duo spent several weeks together in Las Vegas preparing for their bouts, and helping each other as well.

“I was down there helping out Mike and doing my thing too. I feel in great shape. The guys at the PI were awesome,” Arnett said. “I trained at Syndicate with John Wood, and he took great care of me and was awesome. The whole training went great down there.”

Training with Chiesa for years has taught Arnett many things. This year, working with the lightweight for a couple of less-than-perfect training camps has shown Arnett just how crazy this sport can be. From dollys and glass shards, to broken feet and a rough weight cut, Chiesa’s had a rough go of late. But that doesn’t mean you can’t learn from the experience all the same.

“It’s kind of opened my eyes to realize that things aren’t always going to go according to plan. You have to be able to roll with the punches, keep moving forward, keep your eyes on the prize and not let stuff get to you,” Arnett said.

“I’ve been thinking about the same dude for like 12 weeks. I’m ready to just get in there and do my thing.”

The Northwest-native started his camp, nearly three months ago, in Spokane with coach Rick Little and the Sik-Jitsu team. After a few weeks in Vegas, getting his diet on-point and working with some different partners and coaches, Arnett is returning to his roots.

“I’m back in Spokane with Sik-Jitsu, and also trained with Team Execution in Lewiston. I’m finishing up with what I know and who’s got me to where I am,” Arnett said. “Always remembering and trusting in what got you there is important, to not get away from that and who you are.”

Regardless of where he’s been training, getting a full camp has Arnett in the proper mindset ahead of a tough matchup.

“It’s awesome to know going into the fight you’re fully prepared, fully ready, no excuses. You know, may the best man win,” Arnett said. “I’m prepared, I’m ready to go. The only thing that sucks is I’ve been thinking about the same dude for like 12 weeks. I’m ready to just get in there and do my thing.”

Arnett isn’t taking that “dude” lightly. He’s fought some tough competition in his recent run, on the Dana White Tuesday Night Contender series (Brandon Davis) and in his promotional debut (Cory Sandhagen), and the road doesn’t get any easier when he faces Calgary-native Hakeem Dowadu on Saturday night.

“I’m excited for it, he’s tough. He’s really good, really skilled, fast, explosive and hits hard. He’s a dangerous fighter,” Arnett said. “It’s not going to be easy to win. But I definitely have the skill set to do that, and I will.”

And why does Arnett think he’ll come out on top?

“I think in previous fights we’ve seen that he has plenty of holes in his game. He’s very good and very technical, throws very crisp strikes,” Arnett said. “But he’s vulnerable to certain things on the feet, and there’s things grappling that I think I can take advantage of, too.”

Earning a win in the UFC is always a big deal. Doing so on network television is icing on the cake. Competing on Fight Pass in his last two bouts, Arnett is happy to be making the jump to Fox.

“It’s awesome to finally break through Fight Pass and get on regular TV. They know I’m an exciting fighter and I bring it,” Arnett said. “They know it’ll be a fun one to watch and that’s why they’re putting me on there.”

The entire UFC on Fox 30 card will be a fun one to watch. Fun matchups like Arnett-Dowadu are littered throughout the event, ahead of a few headline-worthy bouts. Fighting on the same card as the likes of Eddie Alvarez, Dustin Poirier, Jeremy Stephens, and Jose Aldo isn’t lost on the 26-year-old.

“The card’s freaking stacked,” Arnett said. “Fighting under those guys is cool, and I’m excited to be a part of that group and go and show I belong with the top guys in the world.”

Don’t miss UFC on Fox 30 from Calgary this weekend! Let us know which fights you’re looking forward to most, and what you think of Austin Arnett’s chances against Hakeem Dowadu on the prelims! Comment below, on Facebook, or reply on Twitter! 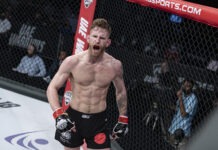 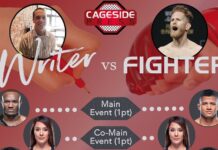