Rick Glenn took on Dennis Bermudez at UFC Boise in Idaho on Saturday, and ‘The Gladiator’ was just barely able to sneak past ‘The Menace.’

An intriguing featherweight match-up promised plenty of violence at UFC Boise on Saturday. Rick Glenn, 2-2 in his UFC run to date and a former WSOF champ, was facing Dennis Bermudez. ‘The Menace’ had been a promising, explosive fighter since his run on TUF. However, Bermudez had notably lost three in a row heading into the promotion’s debut in Idaho. Glenn was also coming off a loss, against Myles Jury at UFC 219. Both fighters needed a win here.

Round one was mostly a feeling out round. Glenn used his unusual feints and double jab to keep Bermudez on the outside and keep control. He also used constant movement, which prevented Bermudez from getting the takedown, as Dennis Bermudez was stuffed on all four attempts in the first.

The second finally saw Dennis Bermudez sticking to his game plan (and more importantly, said game plan working), taking Rick Glenn down four times and trying to land ground and pound. Although Bermudez was getting the takedowns, he couldn’t keep him on the ground. It also didn’t seem like he could figure out Glenn’s unusual striking, as Bermudez, usually game anywhere, didn’t look very comfortable on the feet. Despite this it seemed like round two was Bermudez’s.

Round three featured Dennis Bermudez putting tons of pressure on his opponent, taking Glenn down once again. Landing punches and elbows from the top helped bust up Glenn’s face. It was a very close fight that showcased both fighters, and both found success. Yet it ultimately went to the judges’ scorecards, who rendered a split verdict in favor of Rick Glenn. 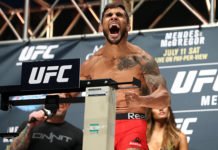 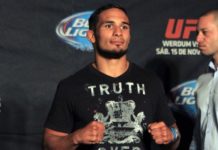 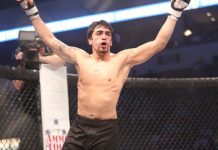