Fans have been demanding to see Francis Ngannou and Derrick Lewis trade blows for the better part of a year. At UFC 226, they will finally collide in a fight expected to provide the fireworks worthy of Fourth of July weekend.

For the past year, it has been the bout that has to deliver. There is no way that it could not. Two heavyweights, a slew of early knockouts between them, who have publicly stated they would take a special kind of joy in separating the other from consciousness inside the cage. Francis Ngannou is a powerful physical specimen, and Derrick Lewis is an unforgettable kind of competitor. Only one can walk out the cage as a victor at UFC 226.

Francis Ngannou was the breakout star of the UFC earlier this January. “The Predator” was coming off the Knockout of the Year against Alistair Overeem and the MMA world became focused on learning about the Cameroonian wrecking machine that was challenging Stipe Miocic. He had only been defeated once before, and he never needed more than two rounds to record each of his victories. But after being dominated in his championship bid, there was question of whether Ngannou could become a well-rounded martial artist who could dominate all comers.

He has discussed what went wrong against Miocic. He had six weeks to prepare for the fight, but moved camp from Las Vegas back to Paris two weeks out from the fight after seeing he didn’t have the resources to properly prepare in Nevada. The result has been well-documented. Miocic survived a dangerous first round with Ngannou, then went on to thoroughly dominate the fight on the ground for the remaining 20 minutes. Ngannou now has a more stable team in place and has promised a return to his devastating form.

Derrick Lewis’ breakout year came in 2016. He put together four victories in the calendar year and six consecutive victories overall. Five of those came by finish, but he began to really attract attention with his unique post-fight interviews. He was candid, and at times crass, but always memorable. When Hurricane Harvey devastated the area close to his home in Houston, videos quickly went viral of Lewis rescuing stranded citizens in his pick-up truck.

Unfortunately, a loss to Mark Hunt and subsequent layoff put a halt to the momentum he had accumulated. He returned this past February to defeat fellow top-ten contender Marcin Tybura. Now, he gets the bout he has long campaigned for and has the most to gain from the fight with Ngannou. Currently, the Cameroonian is ranked first behind the champion while Lewis sits at fifth. Under usual circumstances, Ngannou would likely be campaigning for someone ranked ahead of Lewis to get back to title contention. Instead, “The Black Beast” could leap-frog into a title eliminator while Ngannou could fall out of the top five following Saturday.

Both men rarely go the distance, which has many predicting a first-round knockout. Usually, Ngannou is able to do his best work countering and finding his mark with devastating shots. Lewis, by comparison, comes forward with wide looping punches and delivers violent ground-and-pound when he gets on top of opponents. Both men have struggled with their cardio historically, but Lewis has been known to score knockouts in the third and beyond. Ngannou may fight more conservatively following his last bout, but the possibility of landing one shot to end the fight becomes less likely as the fight goes on. To the delight of fans, both men should be able to fight at a great pace knowing that the bout is only three rounds.

For Ngannou, he will campaign for a bout with the likes of Curtis Blaydes (whom he has defeated before) or Alexander Volkov in an attempt to get back to a title fight. A large part of his route, however, could be predicated on whether or not Miocic is still champion after UFC 226. For Derrick Lewis, anything less than a top-three bout would be a step back as well. As someone who has yet to fight for the title, he would also be a breath of fresh air to the title picture.

In the end, no one will be satisfied unless both men survive the best shots the other has to offer. Unlike virtually every single fight made at this level, this may well be one of the few bouts that fans aren’t as much invested in a winner as much as how the fight will end. What more needs to be said about this collision of Goliaths? 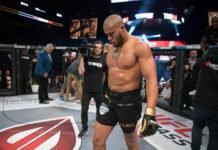