We take a look back at the greatest “heel” moments in the UFC octagon (and elsewhere), including appearances from Nick Daiz, Paul Daley, and more.

What does it mean to be a heel?

It means you’re the ‘bad guy’ that everyone wants to see get beat up, and no one wants to cheer. You think that you like your favorite fighters because of their own merits, but the fact is that your heroes need villains to fight – or they aren’t heroes. David without Goliath is just, David.

Who played that heel role best? Or, at least, what were the best heel moments? Behold our top five.

Babalu was perhaps best known for getting knocked out by Chuck Liddell at UFC 62, or getting finished by Gegard Mousasi to lose the Strikeforce Light Heavyweight Championship, but to many hardcore fans he’ll simply be remembered as a dirty fighter that refused to release a submission hold after his opponent, David Heath, had already tapped out.

Sobral secured an anaconda choke in the second round and refused to release the hold. During his post-fight interview with Joe Rogan, he said that he intended to teach Heath respect after his pre-fight antics.

Having moved on to Bellator, Sobral retired from active competition in 2013 after back-to-back knockout losses in that season’s Light Heavyweight Tournament.

Holly Holm and Germaine de Randamie clashed at the Barclays Center in Brooklyn in February 2017 for the inaugural UFC Women’s Featherweight Championship. A night that was supposed to represent a new beginning for the Women’s 145 pound division in the world’s premier fighting organization instead led to one woman becoming the most hated woman in combat sports not named Angela Magana.

De Randamie and Holm fought a close, but boring, five-round main event at UFC 208 that lacked many memorable moments – but the best punches of the fight didn’t’ come from the 25-minutes of regulated combat we were scheduled to get. The best punches of the night were illegal shots that Germaine de Randamie struck Holly Holm with between rounds.

The hostile New York crowd showered Germaine de Randamie with boos during her post-fight interview with Joe Rogan, and the newly crowned champ was met with an avalanche of social media backlash afterwards.

De Randamie would go on to be stripped of the UFC Women’s Featherweight Championship after refusing to fight Cris Cyborg and has remained inactive since, citing a recurring injury to her hand.

Josh Koscheck was a top MMA Heel in 2010, after his run on the UFC Ultimate Fighter exposed him as a trash talking scumbag – but that’s exactly what Koscheck wanted to be. He made a career of people wanting to see him get his face bashed in. ‘Kos’ was scheduled to face British striker Paul Daley in Montreal at UFC 113 in a title eliminator, with the winner earning a shot at Georges St-Pierre’s UFC Welterweight Championship.

The bout itself was relatively uneventful, with Koscheck winning a three-round decision after outwrestling Daley. Koscheck would repeatedly taunt Daley on the ground, and after three rounds of being held down on the mat, Daley had enough.

Unfortunately, the fight had already ended, and as Koscheck made his way back to his corner Daley would take this opportunity to pounce; a sucker punch!

Referee Dan Miragliotta immediately put Daley in check against the cage and the incident ended before Daley could further damage his career, although this incident would lead to Paul Daley being banned from the UFC for life.

“He’s done! I don’t give a shit if he’s the best 170 pounder in the world – he’ll never come back here again,” said UFC President Dana White at the post-fight media scrum.

Paul Daley continues to compete inside the Bellator cage at a high level but he still hasn’t been welcomed back into the UFC fold even though eight years have passed since the incident in Montreal.

It happened before he was in the UFC, during his UFC tenure, in his last UFC appearance, and has happened subsequently since his UFC release – Rousimar Palhares is a scumbag who refuses to release submissions because he wants to hurt his opponents. Unfortunately for those who choose to compete with him, Palhares’ submission of choice is a leg-lock/heel hook/knee bar that completely obliterates his opponents legs – and he absolutely refuses to let go for many seconds at a time, even if referee intervention has already occurred.

It’s happened countless times already, and will surely happen again, but here are some examples of Palhares being an absolute monster with no remorse for his opponents:

Palhares’ actions led to his permanent release from the UFC, as it was simply too dangerous to risk letting this monster rip apart three contender’s legs a year.

Not technically the UFC octagon (but hey, Zuffa bought the company). When Dan Henderson left the UFC for Strikeforce, his first test would be the organization’s Middleweight Champion, Jake Shields – who himself would be leaving Strikeforce for the UFC.

Shields would get dropped in the first round by Henderson, but survive to win the next four rounds and defeat ‘Hendo’ by decision.

That’s when all the drama unfolded — all because of Jason ‘Mayhem’ Miller. Yep, Lucky Patrick, the ol’ Bully Beatdown host from MTV.

Highlights of the fight and the brawl afterwards can be seen below:

Miller apparently thought he had earned a rematch against Jake Shields, and during Shields’ post-fight interview decided to interject: “What’s up! Where’s my rematch, buddy!?” Mayhem said, before being pummeled by the entire Stockton Crew of The Diaz brothers, Gilbert Melendez, and Shields himself.

The fight was later broken up by security — but the company’s image had already taken a hit. The brawl actually ended MMA on CBS. 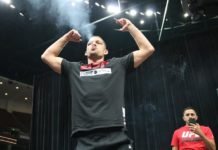