Brazil’s Bethe Correia is on her way back to the octagon, where she’ll fight Irene Aldana according to a new report.

Former women’s bantamweight title challenger Bethe Correia will return to action later this Summer, according to a report by Brazil’s Combate. After nearly a year out of action, she’ll get back in the octagon against Irene Aldana at the event, which is set to take place in Los Angeles this August. Despite her time away, Correia remains ranked 10th in the 135lb division in the UFC. Aldana is ranked 11th.

Last getting in the cage with Holly Holm only to suffer a brutal head kick knockout loss, Bethe Correia (10–3–1) is just 1-3-1 in her last five fights. That dates back to her 2015 loss to Ronda Rousey at UFC 190. Prior to that, however, ‘Pitbull’ was a perfect 9-0 to start her MMA career.

Welcoming Correia back to action will be Irena Aldana (8–4), an Invicta FC veteran whose UFC record currently sits at 1-2. In her last outing, Aldana scored a unanimous decision win over Talita Bernardo. Prior to joining the UFC, Aldana had fought Tonya Evinger for Invicta’s bantamweight crown, which was the time was vacant. She lost that effort, and jumped to the UFC not long after.

UFC 227 takes place August 4 at the Staples Center in Los Angeles, California. A bantamweight title fight rematch between champ T.J. Dillashaw and Cody Garbrandt has also been announced for the event. 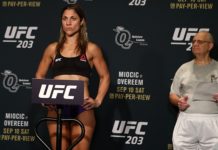