Daley’s always welcome, Cheick Kongo isn’t a title contender just yet, and tournaments are likely to be back next year — that’s just some of the takeaways from Bellator 199’s post-fight chat with Bellator’s Scott Coker.

As any good MMA event should, Bellator 199 created plenty of talk. Crucially, that talk was about more than just the main event, where Ryan Bader finished King Mo in just fifteen seconds to close out the opening round of Bellator’s World Heavyweight Grand Prix. Following the event, Bellator CEO Scott Coker addressed a number of those topics with Cageside Press and other media outlets in attendance.

“I’ll tell you what, he definitely made a statement,” Coker said of heavyweight Cheick Kongo following Bellator 199 on Saturday. Kongo scored a big knockout win over Javy Ayala at the event. “I think that’s a tribute to his training with Tiki [Ghosen], I think Tiki changed his style.”

“Cheick was such a great kickboxer back in the day,” Coker continued, “and he was such a dynamic striker. And then he’s worked on his ground game a lot and his wrestling a lot, and some of his performances have been okay, not exciting, but he showed he’s back to his old self tonight. That was a great counter-punch.”

Yet with all that praise, don’t start saving up for tickets to a future Cheick Kongo title fight just yet. “These are the type of things that, when I think about the future, I think about ‘lets see how the tournament unfolds.'” Coker explained. “‘Lets see how the other signings unfold. Lets see how we all put this together.’ At the end of the day, I’ll sit down with Rich and everybody at the office and we’ll shuffle the deck and come up with the best matches possible.”

As for a return of the Grand Prix format, perhaps at welterweight or featherweight, Coker said that “I want to get through the heavyweight tournament first, but I think it’s a great format for us.”

“I believe that there is a place for tournaments in MMA,” he continued, “and I think this grand prix tournament proves it’s something that’s worth doing.” In short, “don’t be surprised if you see another tournament or so next year.”

And what of Paul Daley, who had a rough go of it at Bellator 199 against Jon Fitch? Coker fully expects to sort out the complicated relationship between the pair. Daley had previously told Cageside Press that nothing had been hashed out between him and Coker. There was also a question as to how many fights the welterweight star had left with the company.

“My feelings have not changed,” Coker told us in regards to Daley. “That is one of the most dynamic fighters that I’ve been associated with. He had a tough match-up with Fitch, and Fitch is a world class athlete.” The Bellator CEO pointed out that ‘Semtex’ “had a tough time getting up, but Paul was almost at the point where he almost knocked him out” toward the end of the first round.

“I love that guy, I think he will always have a seat here,” Coker continued. “He’s welcome to be here in Bellator. I think we actually have some more fights left than he thinks we might have, but I will sit down and talk to him when I get to London. We’ll sort it out. I hope he’s here for a long time. Win or lose, Paul Daley always brings it. I’ve never been disappointed.”

One fight that still interests Coker is Daley against rival MVP. “That’s a fight that I think should happen, and I think it should happen in London.” The promotion will be heading there shorty, for Bellator 200. With luck, they can get something sorted out with Daley then. 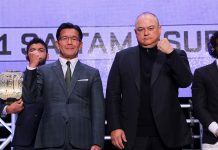 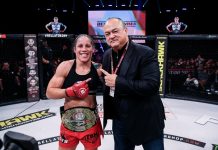