UFC Atlantic City provided plenty of talking points for a card that did not jump off the page in terms of name value. Here’s a thorough recap of all the action from the boardwalk.

The UFC’s ninth visit to Atlantic City took place on Saturday Night and even though a few failed weigh-in attempts and a late injury led to the removal of two fights, Aspen Ladd vs. Leslie Smith and Magomed Bibulatov vs. Ulka Sasaki, the 9,541 fans in attendance for UFC Atlantic City were treated to the scheduled main event of Edson Barboza vs. Kevin Lee. Thankfully, even though Kevin Lee weighed in one pound above the 156 pound non-title limit on Friday, Edson Barboza hastily accepted a catchweight bout of 157lbs in exchange for 20 percent of Lee’s total fight purse.

The story of the night was really Frankie Edgar’s return to form after the hellacious knockout he suffered against Brian ‘T-City’ Ortega just 50 days ago. Could Edgar shake off the cobwebs in that time span?

Cub Swanson himself was coming off of a loss to T-City, a brutal guillotine to be exact, but that wasn’t really talked about coming into UFC Atlantic City. Then again, losses are only so marketable.

Personally, the Edson Barboza vs. Kevin Lee fight became an afterthought after ‘The Motown Phenom’ missed weight. In the wake of UFC 223, missing weight wasn’t the best way to show you’re a company guy. I respect the hell out of Barboza and Lee, but can’t we have just one good thing without an asterisk?

You need to know two things about this fight.

There were moments on this card when it seemed as though elite wrestlers completely lacked the ability to do any damage once they dragged the fight to the ground. Lee didn’t have that problem, he did real damage to Barboza on the ground with vicious elbows and strong punches from mount.

Lee kept his wits about him and ultimately powered through a rough third round and came away with a TKO due to a doctor’s stoppage in the fifth round.

Barboza could use some time off after two back-to-back world-class beatings from two elite lightweights. Edson’s tough as nails.

Frankie Edgar was the better man on Saturday night, landing the cleaner, crisper combinations en route to a unanimous decision win in his home state of New Jersey.

Edgar’s had it rough in recent times, as his father recently lost his battle to cancer and his grandfather passed away – both unfortunately in the lead-up to a fight that was must-win if Frankie wants another shot at the 145lb title. BantamFrankie is still in my dreams.

Swanson vowed to come back stronger after defeat in a post-fight Instagram message:

Well not the outcome I was looking for 😔 but that’s the fight game. Congrats Frankie & I’m sorry to hear about your father 🙏🏽 To all my supporters “Thank you so much & I promise to come back stronger!”

Justin Willis can CRACK, can’t he?

That gas tank might be an issue down the road, but nothing that’s not unfixable at this point in his young MMA career. At 30 years old with eight professional fights under his belt, Willis is practically a newborn in the heavyweight division.

That makes it three straight at heavyweight and that’s no small feat. The fight fan in me wants to see Willis against Tai Tuivasa next, but that’s not smart booking. He should probably be booked against an aging heavyweight with name value to freshen up the division. Heavyweight’s looking promising heading into the tail end of 2018.

Sometimes the highlights do the talking, it’s better that way.

Aljamain Sterling had an impressive outing against the previously undefeated Brett Johns in Atlantic City, but a finish here would have made more of an impact – right? I guess that’s kind of like expecting a double play in baseball though, in that finishing an undefeated fighter just can’t be assumed beforehand.

*I will always put your entertainment as a reader above my writing, hence the video clips of all the relevant action.*

Dan Hooker has now won three straight fights since dropping a unanimous decision to Jason Knight at 145lbs back in November 2016 as he’s dropped Ross Pearson, tapped Marc Diakiese, and flatlined Jim Miller in succession at 155lbs. Normally I wouldn’t know where to stick Dan Hooker because the lightweight division has so much depth, but ‘Hangman’ made it easy by calling out the man conducting his post-fight interview, Paul Felder.

That kid has class.

Look at how scary this whole situation was regardless of what the result was:

Isn’t it more alarming that no matter what the correct decision ends up being that everybody knows that the Athletic Commission in New Jersey won’t budge on their initial ruling?

“Everybody else might have been confused, but I wasn’t. The fight was over,” Simon said at the post-fight media scrum.

Cummins looked like a wet blanket on Anderson in the early goings of this one against the cage, but once Anderson learned that he could takedown Cummins at will the fight became one-sided. Anderson probably should have finished the fight, but given his output late in the third round – he’ll get a pass for the decision win.

Cummins is also tough as nails, the guy never quits.

Oh yea, Anderson rode Cummins like a bull at one point. 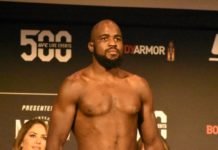 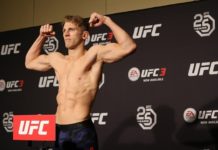