The Canadian Gangster and ‘ZaBeast’ cashed in at UFC 223, picking up bonuses alongside Kyle Bochniak and Chris Gruetzemacher.

UFC 223 went down Saturday in Brooklyn, New York, and proved to be a more exciting affair in the cage than the frankly ravaged card looked on paper. Thrilling bouts between Felice Herrig and Karolina Kowalkiewicz, Zabit Magomedovsharipov and Kyle Bochniak, plus Rose Namajunas defending her title against Joanna Jedrzejczyk all brought enough action to contend for Fight of the Night. With just two stoppages on the card, mind you, there weren’t too many fighters in the running for Performance of the Night — though perhaps the promotion would break tradition and pick one combatant from a fight that went the distance?

Well, maybe some day. At UFC 223, however, the UFC went with the only two fighters who provided finishes on the card, granting both Performance of the Night awards. First up, Olivier Aubin-Mercier, who put on a career-best performance against Evan Dunham on the preliminary card. ‘OAM,’ who spoke to Cageside Press about his desire to jump on the Brooklyn card after a prior fight with Gilbert Burns was scrapped just weeks ago, made short work of the gritty Dunham. A couple of big knees knocked the wind, and the fight out of him, and Aubin-Mercier (11–2) suddenly had the first TKO finish of his career.

After the bout, ‘The Quebec Kid’ transformed into ‘The Canadian Gangster,’ having some fun in the post-fight interview with Joe Rogan. “Yo, I just wanted to be a Canadian gangster,” he told Rogan. “I have a stache, I say sorry, I cry, I don’t give a fox!”

Also rewarded for forcing a corner stoppage after the second, Chris Gruetzemacher picked up $50,000. His opponent, veteran and fan fave Joe Lauzon, was strong out of the gate, but faded fast, taking tons of punishment by the end of the second round. Bloodied and swollen, Lauzon may want to rethink continuing on given the damage he’s taken over the years.

Fight of the Night was awarded to the thrilling affair between Zabit Magomedsharipov and Kyle Bochniak. ‘ZaBeast’ displayed the creative striking and the well-rounded game he’s become famous for, while Bochniak refused to back down, goading his opponent and doing whatever he could to stay in the fight.

All four bonus winners will receive $50,000 U.S. for their efforts. 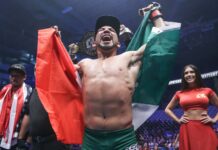 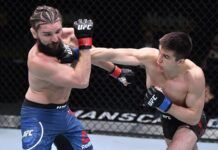