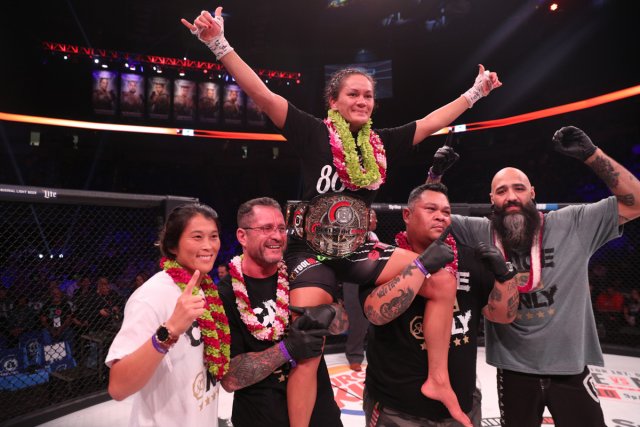 Ilima-Lei Macfarlane makes the first defense of her flyweight title against Alejandra Lara at Bellator 201 on June 29.

Bellator’s Ilima-Lei Macfarlane became one of the stand-out fighters of 2017 when her 2-0 2017 campaign culminated with winning the inaugural women’s flyweight title.  She will now begin her reign as champion with a defense of her title against Colombia’s Alejandra Lara at Bellator 201 in Temecula on June 29.

Macfarlane (7-0) was originally signed to Bellator in 2015 after just one professional fight, the now infamous bout where she dominated the overmatched “Soccer mom” Katie Castro.  In the three years since then, she’s become one of the most popular up-and-coming fighters in the MMA world.  She would face the top names available in Bellator, defeating Jessica Middleton and Emily Ducote and quickly becoming the front-runner to compete for the vacant championship.

In the battle for the vacant title, Macfarlane overcame Ducote in a rematch to be crowned Bellator flyweight champion, notably weeks before the UFC would crown their inaugural champion in the same division.  In the months since then, Macfarlane has been active in using her newfound platform, notably opening up the “Ilimanator Scholarship” that donates $2000 dollars to help indigenous youth attend “Education Enrichment Programs.”  Per MMAFighting.com, Macfarlane said “If I can get one kid to come through this program and have this life-changing experience — because for me it was life-changing and I’m an adult.  If I can get just one kid, then I’m happy.”  Already, Macfarlane’s donation has been matched by Combate Americas star Kyra Batara.

Alejandra “Azul” Lara (7-1) has been a staple on the Colombian MMA circuit since 2011 where she opened her career at 4-0 with three first round finishes.  She suffered her only career loss in 2015, against upcoming LFA title challenger Sabina Mazo.  In 2017, she made her Bellator debut with a third round stoppage of veteran striker Lena Ovchynnikova.

Ovchynnikova was widely sign as one of the possible biggest threats to Macfarlane but Lara controlled the majority of the bout with impressive grappling, eventually finishing the Ukranian contender via submission in the third round.  The victory also earned Lara a new long-term contract that figures to keep her in Bellator’s flyweight ranks for the foreseeable future.

Both women have shown impressive skills on the ground so the bout figures to possibly have excellent sequences when the fight goes to the mat.  For Macfarlane, the bout would continue to build her reputation as one of the top female fighters in the world while Lara has the opportunity to score a huge upset over Bellator’s homegrown star.

Tickets for the event are set to go on sale on Friday, April 06.