Ben Saunders has stepped up to face ‘The Juggernaut’ at UFC Utica.

After another injury set back for Bryan Barberena, veteran Ben Saunders has agreed to step in to take his place. Saunders will clash with fellow vet Jake Ellenberger this June at UFC Utica, otherwise known as UFC Fight Night 131. UFC officials announced the change Thursday. Barberena’s injury was originally reported last week.

For ‘Killa B’ it’s an dangerous assignment. Saunders (21–9–2) is on his second tour of duty in the UFC. And while he’s 5-3 this time around, he has lost two straight. Both of his recent losses saw him finished via KO/TKO, at the hands of Peter Sobotta and Alan Jouban. A third straight loss could once again see him on the outs with the promotion, though his popularity could earn him another shot.

Saunders previously fought in the UFC from 2007 to 2010, going 4-3 in that span. A two-fight skid saw him cut in 2010, after which he landed with Bellator MMA, where he twice made it to the final round of their welterweight tournament (seasons 5 and 8) — only to lose to Douglas Lima each time.

Jake Ellenberger, meanwhile, loses a chance to avenge brother Joe’s loss to Bryan Barberena. However, he’ll get a shot to snap a two-fight losing streak of his own against Saunders. Ellenberger (31–13) has lost four of his last five, and found himself finished by Stephen Thompson, Jorge Masvidal, and Mike Perry. His lone win in that span came against Matt Brown at UFC 201. Ellenberger has remained with the UFC nearly a decade, making his promotional debut in 2009. 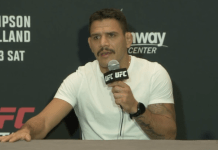