Women’s bantamtweight Gina Mazany will look to put together her first winning streak in the UFC when she steps in the octagon at UFC Liverpool.

On Friday, UFC officials announced yet another promising scrap for the UFC Liverpool card. Gina Mazany, finally back in full swing, will face Lina Lansberg at the event. The contest will go down at bantamweight, and Mazany will be looking to put together her first win streak in the promotion. Lansberg, meanwhile, will be looking to even her record in the company. She currently sits at 1-2.

For Mazany, a member of The Ultimate Fighter 18 cast way back in 2013, the fight marks her third since joining the promotion in a short notice bout against Sara McMann last February. While she lost that fight, she won a unanimous decision at UFC Fight Night 122 in Shanghai last November against Yanan Wu. Now, she’ll look to make it two in a row. It’s an incredible turn of events for Mazany, who fought just once between her 2013 appearance on TUF, and her February 2017 return against McMann, which she lost via submission,

Lina Lansberg, meanwhile, will look to bounce back from a recent loss to Aspen Ladd. Lansberg (7-3) has proven a game opponent in the UFC thus far, facing the fearsome Cris Cyborg in her promotional debut. While that fight was contested at a 140lb catchweight, she moved down to bantamweight after the loss, defeating Lucie Pudilova at UFC Fight Night 107 in London a year ago. She then found herself finished by Ladd. Sweden’s ‘Elbow Queen’ will be looking to bounce back against Mazany.

UFC Liverpool, numerically UFC Fight Night 130, takes place at the Echo Arena on May 27 in Liverpool, England. While Darren Till has been announced for the main event, his opponent has not been officially unveiled thus far. 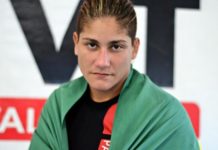 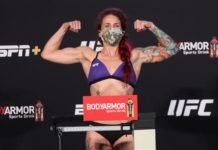 Priscila Cachoeira vs. Gina Mazany Set For UFC Event On May 15 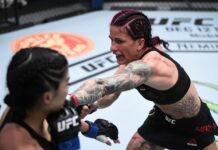