After retiring from MMA for several years, Nick Newell returned this weekend, and immediately got back to doing what he does best: winning, and finishing fights.

In a weekend with little in the way of MMA, outside of the submission filled ONE Championship: Visions of Victory, one fighter in particular stood out on the regional scene. That would be former World Series of Fighting star and title challenger Nick Newell. Newell is currently knocking on the door of a shot at the big leagues, after taking a couple of years off from the sport. In his return at LFA 35 on Friday, he scored a first round neck crank submission of Sonny Luque. That improved Newell’s record to 14-1. And if it was any other fighter, 14-1 would be more than enough to get him into the UFC.

In this particular case, however, whether the world’s top MMA promotion accepts Nick Newell into the fold remains to be seen.

On the surface, it’s a no-brainer. A 14-1 fighter who has challenged for gold in a rival promotion. That title shot in the WSOF came against the walking violence factory that is Justin Gaethje, who made his own debut (and a huge impact) in the UFC last year. Newell’s last six wins have come against fighters with winning records, including Keon Caldwell (11-4) and Bellator vet Eric Reynolds (18-11). Were we talking about any other professional fighter, surely that would be enough to earn a spot in the UFC, who let CM Punk, a WWE superstar with zero MMA experience, fight in the octagon.

However, Newell, as many MMA fans know, is a congenital amputee. The 31 year old from Connecticut was born minus part of his left arm, which ends just below the elbow. To the UFC, that’s a liability. It does, however, make Newell a one-armed man in an ass-kicking contested, which is impressive in and of itself.

That condition is what has kept him out of the UFC to date. UFC President Dana White had plenty to say on the matter back in 2013. When asked about the possibility of Newell fighting in the UFC, the answer (via MMA Fighting) was “Never, no.”

White continued, saying that “It’s hard to fight here with two arms. It’s tough. There’s guys that we bring in that are considered top guys on The Ultimate Fighter that don’t ever really pan out and make it. Will the state of Nevada let him fight? Will the state of California let him fight? Would some of these bigger athletic commissions let him fight? Maybe he can get away with that in some of these other states. I don’t know, fighting with one arm is just craziness to me.”

Newell was licensed and won in the state of California later that year in his promotional debut at WSOF 4. He has not, to date, fought in Nevada, but has been licensed in Texas, Massachusetts, and Florida — all areas the UFC frequents. It’s hard to imagine, at this point, there being any issue with Newell being licensed anywhere, based on his past performances.

There is an argument to be made that earlier in his career, he might not have been ready for a shot in the big leagues. Many of Newell’s early fights came against fighters with less than stellar records. Yet Newell, upon joining the WSOF, began fighting stiffer competition each time out, leading to the Gaethje fight. And when that went South, he bounced back with two more wins in the WSOF before retiring from the sport in 2015.

That retirement came as a result of nagging injuries, including issues with his back that came up in several fight camps. Yet Newell is back in 2018, picking up a win in his return, and presumably healthy. After the victory at LFA 35, the lightweight called for his UFC shot. “UFC I’m coming, and you f***ing know it.”

With eleven of fourteen wins coming via finish, how the UFC can justify keeping him out of the octagon beyond saying “we’re a private company, we can do as we please” remains to be seen. Yet when you’re licensing professional wrestlers and throwing bantamweights to the lion known as Cyborg, can you really keep claiming that it’s an issue of toughness or talent?

Put Newell on Dana White’s Tuesday Night Contender Series. Throw him into a season of The Ultimate Fighter if he’s willing. His “disability” (which has allowed him to go further as a professional fighter than many of his peers) will draw eyeballs. Worse fighters can and have been allowed in the promotion at this point. The case for Nick Newell in the UFC, with that in mind, is a fairly easy one to make. What he does from there only time will tell — but he has earned his shot. 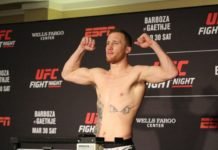