With little else in the way of big league MMA over the weekend, ONE Championship had the spotlight to themselves with Visions of Victory on Friday!

ONE Championship was back in action Friday, March 9. In a week where all the other major promotions were AWOL, ONE had the weekend to itself. The card suffered a late shakeup, however, when flyweight champion Adriano Moraes was forced to withdraw due to an injury suffered in training. As a result, the main event saw original challenger Reece McLaren paired up against Gianni Subba. On the line at the Axiata Arena in Kuala Lumpur, Malaysia was the next shot at flyweight gold.

For McLaren, it mean fighting for a shot that was already his. Subba, meanwhile, had the opportunity of a lifetime. The Malaysian fighter was excited to headline his first ONE card at home, saying in a press release that “Competing at home is always really cool. We get all these family members and friends to come out. The crowd really supports us, and that really helps a lot.”

ONE Championship: Visions of Victory Results: 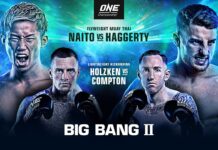