After a long layoff, Cat Zingano returned at UFC 222, looking to regain her spot in the UFC women’s bantamweight division. Ketlen Vieira, however, had other ideas.

Long a top contender in the women’s bantamweight division, ‘Alpha’ Cat Zingano made her hotly awaited return to action Saturday night. She had not fought since UFC 200 in July 2016. At UFC 222 at the T-Mobile Arena in Las Vegas, she faced the surging, undefeated Ketlen Vieira. With an ongoing drought of contenders at 135lbs of late, it felt as if the winner of Zingano vs. Vieira could be on the fast track to a title shot.

As the fight commenced, Cat found herself clipped early, though appeared no worse for the wear. She was leaning into her punches and looking to set things up for the clinch. Leg kicks were a go-to for Zingano early, but Vieira showed crisper striking and was walking her down. Zingano on the other hand had her hands low, and chin high, never a good combination. Cat was able to power her way into a brief takedown, but Ketlen Vieira was quickly back up. A clinch shortly after gave Vieira an opening for a trip off a knee, which allowed her to work for mount. Zingano was able to keep her leg in play, preventing Vieira from obtaining full mount, but she still finished the round on her back.

Round two saw Zingano try to close the distance, and step right into a throw by Ketlen Viera. That powerful throw put Vieira right in mount. Zingano risked giving up her back to get out of harm’s way, but still had Vieira riding her.  The story of the round was just that: control time for Vieira.

Zingano came out swinging to start the third, but after checking a low kick, Cat appeared to hurt her leg. That allowed Vieira to score another takedown, stacking her up against the cage. Zingano bucked her off and worked to land upkicks from the bottom as Vieira regained her composure. She then re-engaged, working within Zingano’s guard. That wasn’t winning the crowd over, but Zingano was trapped. Right until she wasn’t. Powering up Zingano landed a number of heavy shots on Vieira, who opted to tie her up by the fence to buy some time. After a few knees were exchanged the ref broke them up with under a minute remaining. Cat Zingano would then go into berserker mode, trying to find a finish in the dying seconds of the fight. It was too little, too late however, and Vieira would earn the split decision. 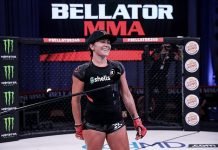 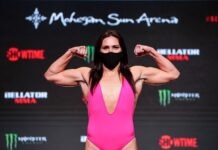 UFC: Holly Holm vs. Ketlen Vieira On Tap for May 21 Main Event