Invicta FC 28 has had a shakeup, with MIZUKI stepping up to fight for gold in the main event!

The Invicta FC 28 card later this month has undergone a major change. Main event fighter Janaisa Morandin has been forced out of the event, the promotion announced Friday. Stepping up to take her place against Virna Jandiroba will be Mizuki Inoue, who had been scheduled to face Milana Dudieva earlier in the evening. Invicta is currently seeking a replacement to face Dudieva.

No reason was given for Morandin’s withdrawal. The Brazilian was looking at her first title shot in Invicta, against her own countrywoman in Virna Jandiroba. Instead, that opportunity now goes to Inoue, billed simply as MIZUKI. Inoue (12–4) is in the midst of a four fight win streak, with her last three fights ending via arm-bar. The Japanese fighter has been splitting her time between Invicta FC and DEEP Jewels, where she holds their 115lb championship. At just 23 years old, she’s poised to become a breakout star in the division if she continues to develop into a well-rounded mixed martial artist.

Jandiroba (12-0) picked up a submission win over Amy Montenegro in her Invicta FC debut late last year. The Brazilian is perfect as a pro to date, and her submission game should be able to give Inoue (who doubles as a kickboxer) a run for her money.

The big question: Inoue has not fought in MMA in over a year, so how will she fare in a title fight against Jandrioba, who fought twice last year? 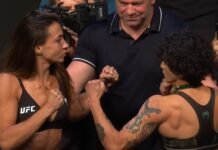