Bellator 195 Results: Joe Warren showed heart, and an impressive chin, but he couldn’t overcome ‘The Juggernaut’ that was Joe Tiamanglo

Former dual-weight class champion Joe Warren got back in the cage at Bellator 195 Friday in Thackerville, OK. Opposite him was a tough out in Joe Taimanglo, with the former champ was looking to overcome Taimanglo and make it two in a row in the 135lb division. The pairing served as the evening’s co-main event.

It was ‘Baby’ Joe Taimanglo coming out strong early and surprisingly taking Joe Warren down. Few saw that coming, but the greco-roman wrestler Warren quickly reversed and had Taimanglo in a headlock. Warren then began dictating the fight, stacking Taimanglo up against the cage. He was in control for a while, but Taimanglo would escape to the feet, and rock Warren with a punch. Warren recovered, and fired back, but was soon under heavy fire. Taimanglo was landing almost at will as Warren covered up; a takedown by Warren was easily shook off. Warren was hurt, and more than once recklessly rushed into harm’s way, only to eat heavy shots from Taimanglo. Yet at the end of the round it was Joe Warren scoring one last takedown and finishing the round in control.

In the second, Warren brought his wrestling early, but much of the action was on the feet. Joe Taimanglo continued to land some heavy shots, but had noticeably slowed. For better or worse, Warren was not willing to back off, even launching a number of flying knee attempts. Taimanglo was finding success with overhands, while Warren simply couldn’t find the much-needed takedown.

Taimanglo’s movement and jab were in play early in the third, as was a hard leg kick he landed on the former champ. Yet Warren scored a knockdown shortly after (if not a trip), and quickly got on top and went to work with ground and pound. Taimanglo found himself with Warren on his back from that point; Warren had a leg in, and briefly looked like he might have a shot at a rear-naked choke. Taimanglo exploded up however, and scored a takedown of his own. Warren gave up his back to get back to his feet, but Joe Taimanglo took him down once more. Taimanglo wasn’t able to do much with those takedowns, and Warren managed one last takedown of his own — right into a guillotine attempt! He pulled free, adding a final ground strike before the bell rang. 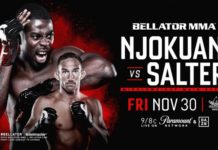 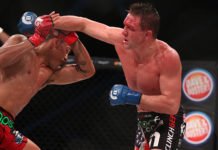 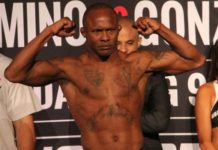