Derrick Lewis was pushed to his limits by Marcin Tybura at UFC Austin, but ‘The Black Beast’ rallied in the third round to knock the Polish heavyweight out.

A heavyweight showdown served as the co-main event in UFC Austin on Sunday. Previously scheduled for UFC Fight Night 97 (which wound up cancelled), Derrick Lewis vs. Marcin Tybura featured two of the promotion’s top ten heavyweights: Lewis at #7, Tybura at #9. One fighter was likely to push towards the top five, while the other could expect to drop back outside of the top ten. The question at UFC Fight Night 126, however, was exactly who would be moving up?

Lewis opened with a kick, then moments later threw a huge punch rushing forward. That turned into a takedown somehow, resulting Lewis landing on top. He then worked to take the back. However, when Tybura made it back to the feet, Lewis was thrown off balance, and it was Tybura gaining top control! He did take the back, but Lewis shook him off. Lewis then rocked Tybura, sending him crashing back down. Lewis got on top, working from half guard. However, with just under two minutes remaining, Tybura scrambled and reversed position! He wound finish the round by taking the back briefly, then threatening with a kimura as the bell sounded.

Round two had Marcin Tybura moving side-to-side and attacking the legs. He attacked upstairs next, while Lewis waited patiently before launching and landing a big right. Another came moments later, but Tybura scored an easy takedown to fend off the assault. That began Lewis’ problems in the round. No fewer than three times, Tybura was able to take his back. Lewis wore him like a backpack, trying to shimmy and shake him off at his corner’s direction. He couldn’t escape, however, and was burning energy carrying Tybura’s weight. Tybura managed to finish the round in mount.

The pair exchanged high kicks early in round three. Tybura was clearly the fresher fighter. Lewis then fired off a punishing combo that backed Tybura up. This time, Lewis hung back, worried about another takedown. Tybura came in and drove him into the fence anyway, trying to get the bigger man down. Just when it looked like Tybura would drag things out to a decision, Lewis found an opening. Landing a left, a right and a second right, he sent Tybura crashing to the canvas! Lewis added some punishing hammerfists on his fallen foe, and ref Big Dan came in to make the save! 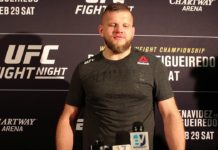 UFC Norfolk: Marcin Tybura Feels Move to Syndicate MMA Has Given Him a Different Perspective 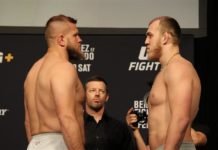