Lyoto Machida will headline a card in his hometown for the UFC, but a tumultuous few years makes this a less enjoyable experience than he would have hoped.

To be able to headline a UFC event in your hometown should be one of the biggest highlights of a fighter’s professional career. For Lyoto Machida however, three straight losses have him fighting for relevancy in the middleweight division as he takes on undefeated up-and-comer Eryk Anders. Headlining a card with notable names in action, there’s a world of pressure for Machida to perform with his back against the wall at UFC Belem.

The career of Lyoto Machida is perhaps more unique than his fighting style. Once a Rubik’s cube of a fighter whose timing and movement made him seemingly untouchable, the field at 205 and now 185 seemingly caught up to him in the blink of an eye and he has struggled to find his footing since.

He last challenged for a UFC title in 2014. It was also the year of his last victory. He would drop consecutive fights to current title challengers Luke Rockhold and Yoel Romero, and then go on to serve an 18-month suspension. The exact reasons were hazy, but the general understanding was that despite Machida being forthcoming, the fact that it was an anabolic agent led to the severity of the ban.

He would return late last year against Derek Brunson in a bout he was favored to win on his movement and experience. Instead, Brunson would put on one of the best performances of his career, stopping Machida in round one in front of a stunned Brazilian crowd. It left a very stark reality: Machida was now 39 years old and had not recorded a victory in more than three years. It raised the question: had Machida lost his chance for resurgence without ever getting into the cage?

Enter Eryk Anders, 10-0 and in only his third UFC fight. Anders is on paper the perfect opponent for those that would criticize that Machida needs a better match-up if he is going to get on track. By all means, “Ya Boi” is not supposed to carry the dangers that Machida’s opponents of the last several years have presented. A quick look at his record would show that “The Dragon” is by far the most accomplished fighter he has ever faced by a mile.

However, in his 10 victories, Anders has finished eight of them by either submission or TKO. His most high-profile opponent has been against UFC veteran Rafael Natal and Anders defeated him by knockout in the first round in the Octagon. Anders may not be considered the favorite, but he is also undoubtedly aware that he could catapult himself into relevancy if he can slay “The Dragon” at home.

Stylistically, the fight looks to be determined by whichever fighter is most effective in controlling distance. Machida is a prolific counter striker whereas Anders likes to use forward pressure and get into a brawl against the fence. The two have the opposite keys to victory: Machida should look to get in-and-out and circle away when backed into the fence whereas Anders should look to stay in the face of “The Dragon” and take his space away and initiate a brawl.

In other action, Valentina Shevchenko will be making her flyweight debut against Priscila Cachoeira. The last time fans saw “Bullet” she lost a tight decision against bantamweight champion Amanda Nunes in a bout where many she likely would have taken handily had she had a higher output in key moments. While she hasn’t ruled out a third bout with “Leoa,” she surprised many by taking on an unknown instead of going straight into a bout with newly crowned flyweight champion Nicco Montaño. Regardless, there’s no doubt that Shevchenko would be the front-runner for a title shot with a victory on Saturday.

For fans unfamiliar with Cachoeira, she was scheduled to make her UFC debut against The Ultimate Fighter stand-out Lauren Murphy before Visa issues kept her from making it to the fight.  While she has fought nearly all of her career in Brazil, she is known for being very active. Cachoeira has only been a professional since 2016 but already has eight professional fights, fighting an impressive rate of four times per year. She will also have the added benefit of a home field advantage fighting in her native country against the more well known Shevchenko.

While only Shevchenko has title implications on the line on Saturday, the card is actually well balanced across the board. Fan favorite John Dodson returns to take on Pedro Munhoz in the co-main event. With the return of a hometown hero in the main event, it’s a night that figures to deliver with impressive MMA action. 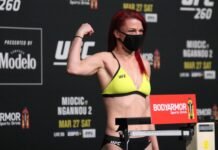