Larkin was looking to bounce back from a rough start to his Bellator MMA career. After winning his last two UFC bouts against Neil Magny and Jorge Masvidal, Larkin had dropped a title shot to Douglas Lima, and was later finished by Paul Daley. Gonzalez, meanwhile, had won his last two — but again struggled to make weight, coming in just over 180lbs.

The pair got to work early in the main event Friday. Gonzalez went to the body with kicks; Larkin went to the thighs. A straight right by Larkin connected, and he continued to attack the legs. In the final minute of the first, the pair opened up. Fernando Gonzalez pressed forward, swinging. Larkin was briefly forced to retreat, but regrouped, and fired off a few strikes of his own.

Lorenz Larkin opened round two with a leg kick, and the pair circled, looking for an opening. Larkin went upstairs with a kick that was blocked; Gonzalez moved in, but Larkin escaped out of range. Larkin unleashed a few teep kicks throughout the bout, and added another just around the three minute mark. He got his jab firing, but Gonzalez answered back with a heavy punch of his own. The left hand was there for Fernando Gonzalez, but ‘The Menifee Maniac’ was hesitant to pull the trigger.

Gonzalez changed stances fluidly between southpaw and orthodox early in the third. Larkin seemed like he was looking to launch a jumping attack but pulled up. He was, however, slowly starting to pull away. A knee from Larkin connected, though Gonzalez would try to grab it. Larkin then landed a punch to the side of the head. He consistently managed to get around the defenses of his opponent. Another knee for Larkin landed, Gonzalez then went to the body, backing Larkin up. The back and forth battle heated up as they reached the final minute. Fighting right to the bell, Larkin hurt Gonzalez with a left, and a standing elbow followed by a barrage of punches to put a punctuation mark on the affair! In the end, it was Larkin with his hand raised, snapping a two-fight losing streak. 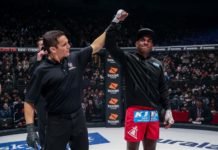