Kamaru Usman turned it up to eleven on Sunday night at UFC St. Louis. That is, he notched his eleventh straight win, and seventh in the UFC. He’s now holder of the longest winning streak in the UFC’s welterweight division. He has never lost a fight in the promotion, including his stint on The Ultimate Fighter 21, which he won. Usman dominated Emil Weber Meek on Sunday, dictating where the fight played out for essentially the entire duration. Yet despite the dominant performance, UFC President Dana White is not impressed.

Without question, the wrestling-heavy affair did not go over well with the fans in Missouri. Usman (12-1) was heavily booed during his post fight interview, which he used to call out Colby Covington (check the interview out in the video below).

Questioning Usman’s comment that he “fought this fight sitting at thirty percent,” White said on the Fox Sports 1 Post-Fight show that “When you have a performance like that — I didn’t love that fight by the way — yeah he’s a tough guy, yeah he can impose his will, but you don’t jump up and start talking smack like you just knocked somebody out or something, and say you only went thirty percent. So what’s that mean? What if you’re on a Pay-Per-View, you do sixty percent? I mean, it’s one of the most ridiculous things I’ve ever heard somebody say. And you’re getting booed out of the arena on top of it.”

While it’s clear White isn’t a fan of Usman’s style, it’s another case of the UFC disparaging one of its own fighters, rather than trying to build them up. Or at the very least, trying to explain the importance of wrestling in the MMA world to casual fans who are mostly interested in knockouts. After all, what went wrong for Meek was pretty easy to sum up:

Moral of this fight? Train wrestling. A lot of it. You're gonna need it. #UFCSTL

With White saying only that “we’ll see what’s next for him” in regards to any subsequent match-up for Usman, it seems clear he won’t be getting the desired crack at Covington. Ironically, Covington has a wrestling-heavy style as well, but has turned himself into a villain you love to hate over the past year. 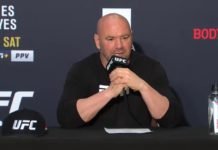