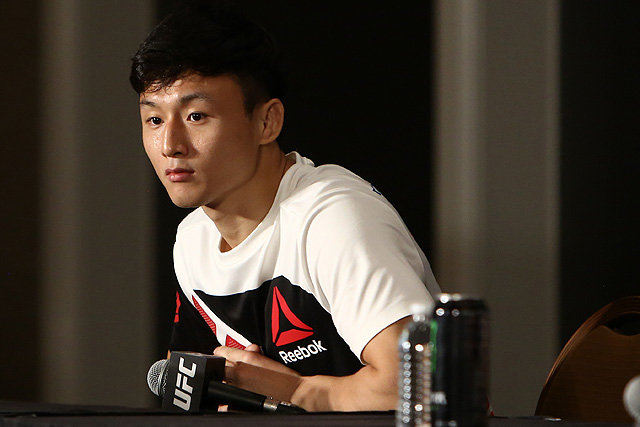 UFC St. Louis kicks off 2018 for the leading MMA promotion and it also cleans the slate of Cageside Press’ staff picks.

Before we get into tomorrow’s event, UFC St. Louis, congratulations to Heath Harshman for having the highest success rate on the staff in 2017 with a very impressive 65%.

The main event is a great one. Veteran Jeremy Stephens will welcome top prospect Doo Ho Choi back to the Octagon following a layoff of over a year. Stephens bounced back from a two-fight losing streak with a dominant win over Gilbert Melendez. Stephens crippled the leg of Melendez in the first round, then teed off on his opponent for the remainder of the fight. Doo Ho Choi sat out in 2017 following an injury that removed him from a scheduled bout with Renan Barao. Choi is 3-1 in the UFC with three first-round knockouts and one fight of the year. Seven of 11 writers sided with The Korean Superboy Doo Ho Choi.

The co-main event will be the final appearance of the legendary Vitor Belfort. Belfort has seen better days, losing three of his last four, with the one win being a controversial decision victory over Nate Marquardt. Facing him on the other side of the Octagon will be Uriah Hall. Hall also bounced back from three straight losses with an unbelievable comeback knockout over Krzysztof Jotko in his last bout. Cageside Press unanimously picked the younger Uriah Hall.

Paige VanZant will make her flyweight debut against Jessica-Rose Clark. VanZant is 3-2 in the UFC, losing most recently against Michelle Waterson. Clark made her Octagon debut in November with an impressive performance against Bec Rawlings. Close picks for this one, six writers went with PVZ, while five picked Jessy-Jess.

Kamaru Usman will open up the UFC St. Louis main card against Emil Meek. Usman is seen as one of the UFC’s brightest prospects, with a 6-0 record in the Octagon, all being dominant performances. Emil Meek burst onto the scene two years ago with a win over Rousimar Palhares outside the UFC, then defeating Jordan Mein in his Octagon debut. However, all writers went with Kamaru Usman for this one.