RIZIN’s final event of 2017 has come and gone, but check out highlights of the action below!

On New Year’s Eve in Saitama, Japan, the RIZIN World Grand Prix 2017 Final Round took place. The final major event of the MMA year, the card featured the semi-final and final rounds of both RIZIN’s men’s bantamweight and women’s super-atomweight tournaments. Along with those attractions, the card also featured Japanese MMA pioneer Takanori Gomi, plus heavyweight legend Mirko Cro-Cop.

Early in the night, both the main and co-main events were set for all-Japan showdowns. Kyoji Horiguchi got the better of Manel Kape in a spirited battle that saw the Japanese vet submit Kape in the third round. Shintaro Ishiwatari, meanwhile, took out Takafumi Otsuka in the other semi-final bout. Though a cut caused some concern about Horiguchi’s availability for the finale, doctor’s cleared him post fight.

On the women’s super-atomweight side, promotional darling Rena Kubota continued her dominance, improving to 6-0 with a TKO of Irene Cabello Rivera. Kanna Asakura then submitted Maria Oliveira via arm-bar in a fantastic showcase of her ground game.

‘The Fireball Kid’ Takanori Gomi, meanwhile, was desperately looking for a win. While he didn’t get it, he put on a war with Yusuke Yachi in what might have been the most entertaining Gomi bout in years. After eating a ridiculous number of knees, Gomi stormed back, dropping Yachi and moving in for the kill. The veteran found himself caught in a triangle, however, and unable to slam his way out of it, he was forced to tap.

Also on the card, the return of heavyweight legend Mirko Cro-Cop, who improved his winning streak to eight by making short work of Japanese veteran Tsuyoshi Kosaka.

Then came the finals of the night’s big tournaments, which saw Kyoji Horiguchi, Kanna Asakura, and Tenshin Nasukawa (in the flyweight kickboxing grand prix) win big.

Catch highlights of the action below, courtesy of RIZIN FF! 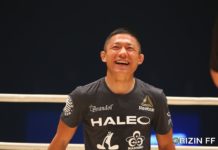