UFC London had a trio of fights announced Thursday morning.

The UFC’s next trip to London has a number of recognizable names on the card. In an announcement via its official website made Thursday, the UFC announced three fights for the event. Among them are a heavyweight scrap, a surging welterweight prospect, and an unbeaten Russian light heavyweight. UFC Fight Night 127 (or UFC London if you prefer) takes place in London, England on March 17 at the O2.

In heavweight action, Mark ‘Hand of’ Godbeer (13-3) will be looking to thrill the hometown crowd with a big finish. The thirty-four year old has won his last two fights, though it’s worth noting that his most recent win was a DQ thanks to Walt Harris using an illegal head kick at UFC 217.

Opposite Mark Godbeer at UFC London will be Dmitry Poberezhets (24-5-1(1NC)). A UFC newcomer, Poberezhets is nonetheless plenty experienced. Having gone pro in 2009, he has not lost since 2012. The only blemish in his fifteen fight undefeated streak is a no contest last year against Evgeni Myakinkin.

Also on the card, hot welterweight prospect Leon Edwards (14-3), out of Birmingham, will take on Poland’s Peter Sobotta (17-5-1). Edwards has won four straight in the UFC, with his only recent loss coming to Ultimate Fighter winner Kamaru Usman. Sobotta, meanwhile, a former KSW star, has gone 4-1 in the UFC. Last time out, he stopped the rugged Ben Saunders. 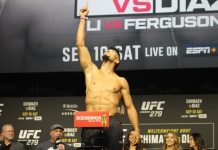