A pair of highly anticipated promotional debuts will take place at Bellator 191 in England next month.

In a press release Wednesday, Bellator MMA announced that both Michael McDonald and Valerie Letourneau will make their long-awaited promotional debuts next month. McDonald, a top bantamweight Bellator signed earlier this year after he requested his release from the UFC, will headline Bellator 191 in Newcastle, England. Letourneau, a former strawweight title challenger in the UFC, is also on the card.

In the main event, McDonald (17-4) will face France’s Peter Ligier (8-1-1). Ligier will be making his promotional debut in the fight, having competed on the European circuit over the past few years. With eight wins in ten fights as a pro since 2013, Ligier has not lost since 2014, and is currently on a three-fight win streak. Among his eight wins are five stoppages.

McDonald, of course, was a top ten bantamweight who fought in both the WEC and UFC. Still just twenty-six, ‘MayDay’ last fought in July 2016, losing to John Lineker. Overall, he went 6-3 in the UFC, and faced some of the promotion’s best names in the 135lb class, including Urijah Faber, Brad Pickett, and Renan Barao. The Barao fight was contested in 2013, with bantamweight gold on the line.

Valerie Letourneau (8-6), meanwhile, will feature in Bellator 191’s co-main event. She’ll face TUF alum Kate Jackson (9-2-1), who is coming off a win in August over Colleen Schneider at Bellator 182. ‘Trouble’ won three straight at the start of her UFC career, earning a shot at then strawweight champ Joanna Jedrzejczyk. That title shot fell short, however, and she lost her next two. She then jumped to Bellator, who beat the UFC to the punch in opening a women’s flyweight division. 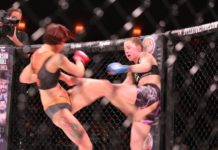