Mei Yamaguchi isn’t getting the title shot she expected at Friday’s ONE Championship: Immortal Pursuit, but as she puts it, “my story does not end here.”

ONE Championship: Immortal Pursuit takes place Friday, November 24 at the Singapore Indoor Stadium in Kallang, Singapore. Originally scheduled to be part of a co-main event atomweight title fight, Japan’s Mei Yamaguchi saw the opportunity for gold dashed when champion Angela Lee was involved in a horrific car crash. Luckily for everyone, Lee survived with only minor injuries after falling asleep at the wheel and rolling her car on the way to an early morning training session. That left Yamaguchi looking for a new dance partner, which the promotion found in the form of the Philippines’ Gina Iniong.

Yamaguchi and Lee have a history together. The pair battled it out for the inaugural ONE atomweight title back in May of 2016. That fight also took place in Singapore, at the very same venue Yamaguchi will enter at Immortal Pursuit. Lee took a unanimous decision, and the title, that night, becoming arguably ONE’s biggest sensation in the process. A submission victory over Jenny Huang this past June punched Mei Yamaguchi’s ticket back to a title fight, only for the rug to be pulled out from under her at the last minute.

Of course, suddenly losing a title shot can’t be easy — so how did Yamaguchi feel when hearing she wouldn’t be fighting for the title at Immortal Pursuit? Cageside Press put that question, and a few others, forward, and ONE was kind enough to reach out to the fighter (Yamaguchi’s answers also appear in a press release sent out early Monday).

“I was told that Angela was in a car accident. I was surprised, but was so glad that she was okay” the atomweight fighter responded. “Then, I tried to keep concentrating on my training because I believe that ONE Championship was looking for another opponent.”

They very much were, giving Gina Iniong the nod. It’s another rematch for Yamaguchi, as the pair first fought under the Pacific Xtreme Combat banner in 2014. That night, it was Iniong who had her hand raised, winning a split decision. Does the late change in opponent provide any specific difficulties in terms of preparation?

“I was glad that Gina answered ‘yes’ to the match on the Singapore card with me. I have always looked for a chance for revenge” Yamaguchi explained. “This is the perfect moment.”

“We fought before. My image of the last match was Gina getting some points with her boxing, and me with my ground game,” she stated “It was back and forth, but all of my team thought I won.”

Had Yamaguchi seen much of Gina Iniong lately, and how does she feel the fight against her will go?

“Gina has a really good right hand she throws, and she is strong and physical” she answered. “I am better with the ground game and improved more in my boxing skills compared to our previous match.”

“She competed against a good kickboxer recently, was controlling her opponent well on the ground, and was really aggressive. She looked like she won without taking much damage.”

Finally, the big question – with a win over Iniong, is Mei Yamaguchi expecting to fight Angela Lee next? “Of course, my story will not end here. It is going to end early. It will be a clear finish by me. It is going to be a knockout.” 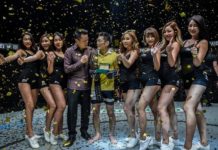 Gary Tonon, Yoshitaka Naito Among Additions to ONE Championship: Enter the Dragon