Israel’s Noad Lahat anchored the main event at Bellator 188 — could the Israeli make it four finishes in four fights on the main card?

Bellator 188 went down in Tel Aviv, Israel, airing via tape delay on Spike TV Friday night. When the original main event of Patricio Pitbull vs. Daniel Weichel was lost due to a Pitbull injury, Noad Lahat vs. Jeremiah Labiano was bumped up the the headlining spot. It came following a solid night of action that saw three finishes — all submissions — come in the other three main card bouts.

Lahat had talked a bit of trash leading up to the fight. Would he back it up in the cage?

The Israeli stalked his prey early, while Labiano used his kicks to keep Lahat outside. Lahat flashed some level changes, then caught a kick but couldn’t convert it to a takedown. Instead, he pressed Labiano against the cage. Labiano would be careful to avoid the power of Lahaht, but could not keep Lahaht from sneaking in with roughly two minutes left in the round. A quick assault would lead to the fight going to the ground, as Jeremiah Labiano lost his footing. That resulted in Labiano on his back looking to land an upkick. Lahat avoided that, and went to work inside his opponent’s guard. Controlling the action, it was easily his round.

Round two saw Lahat look for a takedown early. A low blow would briefly pause the action, after which Labiano would look to turn up the heat. A clinch in the middle, however, led to Lahat pressing his foe against the fence. Labiano would fight his opponent off for a time, but eventually, Lahat dragged him to the floor. Lahat was able to work from half-guard, trapping Labiano against the cage and landing a couple of heavy punches. He’d re-position to keep his foe from making it back up, and continue with the smothering pressure. His assault would be halted, however, when the ref deemed a Lahat elbow had connected with the back of Labiano’s head.

The illegal blow earned Lahat a point deduction, which could factor in in a big way were the fight to go to the judges. Back underway, Lahat and Labiano quickly went to the ground with Lahat looking for a heel hook. Labiano would counter with a leg lock of his own, which would take them to the end of round two.

In the third, Lahat would look to set things up with his jab. Labiano still looked fresh, and thanks to the point deduction, it was still anyone’s fight to win. Crucially, Lahat was winning the small battles, for head position, control, and dictated the pace of the fight. Another takedown saw him back in half-guard, with Labiano desperately needing to get back to his feet. Instead, Lahat would briefly pass into mount, then move back to half-guard while looking to land some bombs from the top. Some heavy shots to the ribs got Labiano’s attention, but he was unable to escape. With seconds to go, the ref would stand them up, with Labiano executing a flying knee and throwing a barrage of punches, with Lahat returning fire.

it was too little, too late however, as all three judges saw it the same, giving Noad Lahat the nod 29-27. 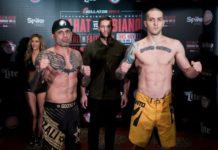