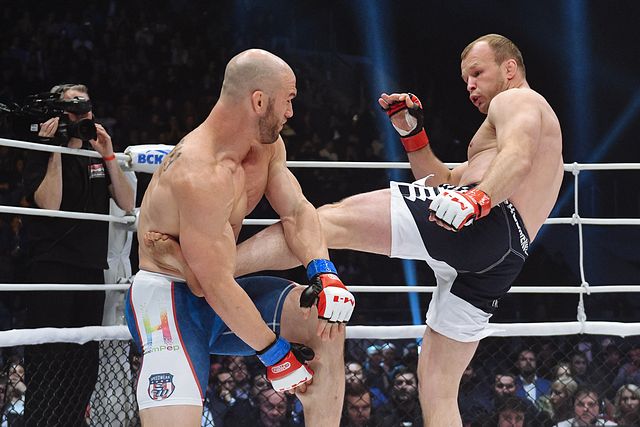 Alexander “Storm” Shlemenko has a cloud of controversy hanging over him, but Bellator 185 could provide his greatest redemption.

Nearly every division in Bellator has grown as the organization has had a wind-fall of free agent signings that captured headlines. Both veterans and newcomers have collided as the entire roster jockeys for an opportunity to hold championship gold in the promotions banner year. However, one fighter who seems to have been forgotten is Alexander “Storm” Shlemenko. The former middleweight champion has been out of the Bellator cage for nearly a year but on October 20 he will get a chance to shock the world when he faces Gegard Mousasi.

Shlemenko’s plans have taken several turns in the past year.  In 2015, he was suspended for three years after testing positive for steroids against Melvin Manhoef. While he battled the ban in court, he was granted the opportunity to stay active when Bellator gave him permission to compete in his native Russia for M-1.

The middleweight division moved on as Rafael Carvalho claimed the title and defended it in Shlemenko’s absence.  Even when Shlemenko’s ban was lifted and he defeated Kendall Grove in 2016, Bellator appeared to not have room for him in their loaded schedule.  It’s a fact that “Storm” admits affected him.

“I want to fight often. That’s what I want, that’s what I need. That’s why it was very disturbing for me and unfortunate that I stayed without a fight for almost a year. I was ready for a fight, I was in good shape all the time but Bellator just didn’t give me a fight in that time. So I do really miss the opportunity to fight in the U.S.”

While he may have been outside of the Bellator cage, it didn’t mean that he was complacent in his training. Shlemenko has joined a team called “New Stream” which features some of the best up-and-coming prospects coming out of Russia.

“Most of the guys we have on the team are Russian fighters who compete in the top Russian promotions. We’re a team for future legends, among them: Alexander “Tiger” Sarnavskiy, Alexey Kunchenko, the M-1 welterweight champion, Damir Ismagulov, the M-1 lightweight champion, and a bunch of other young kids who have a great future in front of them.”

On a personal level, 2017 has not been without without it’s own gratification for the Russian. This past June, he avenged his loss to Brandon Halsey who had previously beaten him for the Bellator title in 2014. The loss to Halsey was very disappointing, coming a mere 35 seconds into the first round. Shlemenko returned the favor and then some by scoring a TKO of Halsey 25 seconds into the opening frame in the rematch.

On paper, it appeared that Shlemenko was a clear cut option for a fight with Bellator middleweight champion Carvalho this fall. While even the middleweight champion expressed interest in the fight, Bellator’s plans changed when they acquired their biggest free agent to date in Gegard Mousasi. “The Dreamcatcher” had put together a five fight win-streak in the UFC and would have been an obvious title contender if their middleweight division was not so convoluted.

Mousasi enters Bellator as the highest ranked fighter pound-for-pound currently on their roster and has already discussed the possibility of being a two-division champion in his new home. Understandably, Shlemenko has felt even more slighted in light of recent events as he had his own plans to reclaim the top spot at 185.

“I was ready to fight Carvalho after I fought Kendall Grove, but nobody offered me that fight. When I was offered the fight with Mousasi, I accepted it right away because I just want to fight. I want to stay active.”

For many observers, the fight should be a clear title eliminator in the middleweight division with the winner facing the victor of Carvalho and Alessio Sakara in December. While such assumptions are obvious for Mousasi, Shlemenko claims that he has not been given an indication by Bellator that he would get a title shot with a victory.

Mousasi has been a vocal critic of Shlemenko, insisting that he be tested ahead of their fight. His comments are a response to the fact that the results of Shlemenko’s failed drug test showed that he had levels of 50:1 in his system, one of the highest levels ever recorded.

Shlemenko has heard the criticism before, but feels that they come from a different place than Mousasi would suggest. Considering the hype surrounding his debut, Shlemenko believes Mousasi is looking for an excuse should he not be successful in his arrival to Bellator.

Shlemenko has no issue confronting his doubters, stating, “…I’m always ready.  Every time I come to the states, it doesn’t matter if I’m fighting or not, I get tested.”

With a victory, Shlemenko would notch the biggest victory of a career that has spanned more than 60 fights. In the process, he would turn away the fighter who has been heralded as one who is expected to achieve more than any other fighter has done while competing under their banner. With such an opportunity in front of him, it would appear that the perfect storm has finally come together for Shlemenko’s incredible career.

Alexander “Storm” Shlemenko will be fighting Gegard Mousasi at Bellator 185 on October 20, on Spike TV. 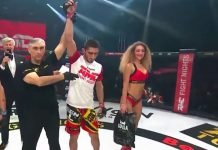