RIZIN FF returned to action on Sunday in Fukuoka, Japan, offering up their Autumn 2017 card. The second half of their World Grand Prix 2017 Opening Round, featuring a women’s atomweight and man’s bantamweight tournament, there was plenty of action – and some old, familiar names on the card.

Among notable names of yesteryear included Frank Shamrock and Sakuraba. Originally scheduled to face Dan Henderson at the event until Hendo was forced out due to injury, recent UFC Hall of Fame inductee Sakuraba instead squared off against Shamrock in a grappling match. Neither man was able to get the better of the other, however, and the action went the full ten minutes before the affair was declared a draw.

Kickboxer Jerome Le Banner was also in action Sunday, with less than favorable results. So too was Tatsuya Kawajiri, who suffered a shock upset against Gabriel Oliveira when the Brazilian finished him with a knee. Kawajiri had been hoping to enter the bantamweight tournament with a win over Oliveira in their catchweight bout, but it just wasn’t to be.

Check below for a recap of some of the key fights on the night, as well as full results from the RIZIN FF World Grand Prix 2017 Autumn Card (Opening Round Part 2)!

Kickboxing star Jerome Le Banner returned to MMA as part of RIZIN FF’s Autumn 2017 card in an openweight bout against Roque Martinez. Despite being billed as openweight, both men came into the fight within the heavyweight limit.

As the action got underway, Le Banner immediately went on the attack, backing Martinez into the corner as the heavier man covered up. Surviving the initial onslaught, Martinez then pushed forward, but Le Banner was able to stay out of range of Martinez’s strikes. Martinez then shot a double and landed it, and quickly passed guard. That was the beginning of the end for Le Banner. As he tried to push Martinez off him, Roque moved into position for a scarf hold choke, using his chest to apply pressure. It wasn’t long before Le Banner was forced to tap.

Miyu Yamamoto was back in action for RIZIN FF as part of the Autumn Grand Prix card. Able to take down and control opponent Irene Cabello Rivera repeatedly in the first round, it looked as if it would be smooth sailing for the “Fighting Queen Bee.” Yamamoto would utilize a lead jab followed by a powerful double leg to dominate Rivera early, though Rivera would threaten with an arm-bar at the end of the first round.

The second saw the action stay on the feet a little more, but Yamamoto would score a takedown just prior to the three minute mark. This, however, would prove to be her undoing. Rivera would convert a triangle attempt to an arm-bar, and while the Japanese fighter would try to roll through it, she was forced to tap, giving “La Nina” the most high profile win of her career.

The night didn’t go any better for Yamamoto’s son Erson, who was finished via head kick in the first round of his bout against Manel Kape.

Former King of the Cage women’s atomweight champ Andy Nguyen faced off against RIZIN promotional darling RENA in the main event of Sunday’s card. It wasn’t a great start to the match-up as Nguyen missed weight for the fight.

Once the  action got underway, after some early exchanges on the feet, Nguyen took the fight to the canvas, staying busy inside RENA’s guard. For her part, RENA was active off her back and tried to scramble out, but on her way up, “The CrAsian” was able to take her back and lock in a body triangle as RENA stood by the ropes. From there, Nguyen peppered the Japanese fighter with punches to the side of the head as she looked to slip an arm under her opponent’s chin. It looked as if Nguyen was in the driver’s seat, but it wouldn’t last.

RENA, would break free, and begin lighting Nguyen up on the feet, mixing in some solid body shots in the process. A knee to the body and another flurry of shots had Nguyen against the ropes covering up. Ultimately, it was another hard punch to the midsection that felled her, as Nguyen dropped down, unable to defend further. 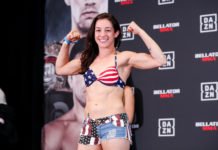 Bellator 222 Results: Lindsey VanZandt Chokes Out Rena in First Round