Conor McGregor’s return to MMA is the most anticipated events in combat sports. But with several options, who will be the fighter that meets him in the cage?

Tony Ferguson has now claimed the UFC Interim Lightweight title, and in doing so he has ignited the debate about what is next for the undisputed belt currently around Conor McGregor’s waist.  The list of challengers features several intriguing characters and roads the UFC could take, but only one will get the lucky call to enter the biggest fight in mixed martial arts.

First, Tony Ferguson has now won ten fights in a row and proven he is the best active lightweight in the UFC after dispatching Kevin Lee.  His 2017 has not been without it’s pitfalls. In March he was set to face Khabib Nurmagomedov before the Russian pulled out of the fight on the day of the weigh-in.  He then found himself on the sidelines, watching McGregor’s boxing saga unfold.  While “The Notorious” recently ended his vacation in Ibiza, it’s increasingly unlikely that McGregor will be returning in 2017.  That set in motion the interim title match where Ferguson rallied back to defeat a game “Motown Phenom.”

The UFC appears to be rewarding his preparedness in the face of adversity as he was given the nod for an interim title over the previously higher ranked Nurmagomedov.  A fight with McGregor makes the most sense, as Ferguson is the clear-cut number one contender, having overcome every fighter that has stepped up to face him in the last four years.  He’s a durable and unorthodox fighter who would be a great test for McGregor.  But while he’s the most logical option, he is far from the only one.

The second choice, and by some accounts the more appealing, is to complete the trilogy with Nate Diaz.  The saga has been well chronicled since last year: then lightweight champion Rafael dos Anjos fell out of a fight with McGregor and Nate Diaz would shock the world in submitting McGregor after stepping in on two weeks notice.  McGregor would then avenge the loss in a fight of the year candidate months later.

A fight with Nate Diaz has always sold itself.  It’s a contrast of personalities, styles and fanbases.  McGregor draws a large crowd regardless of opponent, and the Diaz brothers have a cult following that has consistently tuned out to support them regardless of their success.  McGregor captivates the public and Diaz is a willing dance partner.  However, Diaz in recent years appears unwilling to attend the party unless he’s the one paired with the Irish sensation.  Diaz has not fought since the rematch with McGregor in August of 2016.  Despite offers to fight former champion Eddie Alvarez and call-outs by Ferguson, Diaz has repeatedly been uninterested unless it’s for a big money fight.  Make no mistake, he is aware that the only fight with the price tag that interests him is McGregor.

The issue: would the lightweight title be on the line?  McGregor gives up several physical advantages at 170, and the victory he did have over Diaz was very close.  For the fight to occur at 155 would be to give Diaz a title shot despite the fact that he has not fought in over a year, and is only 2-3 at lightweight since 2012.  This leads to a dilemma: If this is fight then gets made then either Diaz gets a title shot despite his record or the belt is not on the line and McGregor makes an awkward return without defending the title he won when he made history.  There is also the question: If Diaz were to hypothetically fight for the title and win, would he defend the belt against opponents who could not bring in the same amount of money?

Finally, there is increased speculation about a fight between McGregor and Khabib Nurmagomedov.  The plan being that the fight take place in the UFC’s debut in Russia.  McGregor has broken many barriers for the organization and is easily the most famous fighter of the era.  However, to break new ground in a previously unattainable market like Russia would be an impressive benchmark even by his standards.  For the bout to also take place against an undefeated grappling expert, on paper who could exploit McGregor’s biggest weakness, the legendary chapter is practically laid out on a silver platter.

As appealing as “The Eagle” may be to McGregor, that option appears to be the least likely. Even Nurmagomedov himself seemed to take a tongue-in-cheek approach when he congratulated Ferguson on his victory, implying a desired New Year’s Eve match-up between the two.  There is also the fact that Nurmagomedov has not competed since 2016.

As of this writing, UFC President Dana White has said that the unification bout between McGregor and Ferguson is the one that needs to happen and that “The Notorious” still wants to fight before the end of the year.  While the bout is the most logical, there are plenty of turns that could take place before then.  What will actually happen next with the lightweight title?  We can only wait and see. 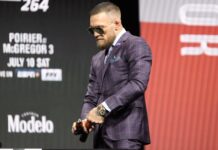 UFC 266: Nick Diaz Didn’t Anticipate “So Much Heat and So Much Expectation” Ahead...