Fabricio Werdum was set to fight Derrick Lewis at UFC 216, right up until he wasn’t. Which was just about at the very last moment — but thankfully, at least Werdum would stay on the card, thanks to Walt Harris jumping at the opportunity to fight the ex-champ.

What started out as a fun heavyweight scrap between a former champ and one of the UFC’s scariest big men in Lewis took on a new light in the build up to UFC 216. The event, originally set to feature Fabricio Werdum vs. Derrick Lewis as the co-headliner, saw the fight dropped down a spot when Mighty Mouse vs. Ray Borg joined the card. That said, Lewis vs. Werdum was still a fight that promised fireworks.

Then former heavyweight champ Werdum went and got into a brief spat with Tony Ferguson at a UFC media luncheon, and tossed out a gay slur in the process. As it wasn’t the first time Werdum had a) used a gay slur and b) got into it with a smaller fighter, he instantly became the target of a number of fans’ wrath. Suddenly, there were as many Werdum haters as fans — and both were quite vocal in their hopes regarding the outcome of this fight.

Then Lewis announced late Saturday that a nagging back injury had flared up, and he was off the card. Walt Harris stepped up, but he certainly had a mountain to climb in the form of former heavyweight champ Werdum.

Werdum entered the night off a close loss to Alistair Overeem, a majority decision at UFC 213 that easily could have gone his way. Harris, for his part, was on a two-fight win streak with victories over Chase Sherman and Cyril Asker.

A touch of the gloves, and they were off. Werdum went for a high spinning kick early, then grabbed a leg and finished a single-leg takedown. That put the former champ right where he wanted to be — on top, with the fighters still dry. Harris would try to work his way up, but got caught in an arm-bar and was forced to tap. This one felt like it was over before it ever got going, but kudos to Walt Harris for taking on such a huge challenge on such short notice. 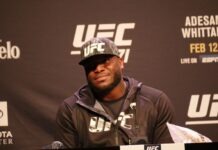 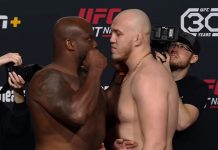